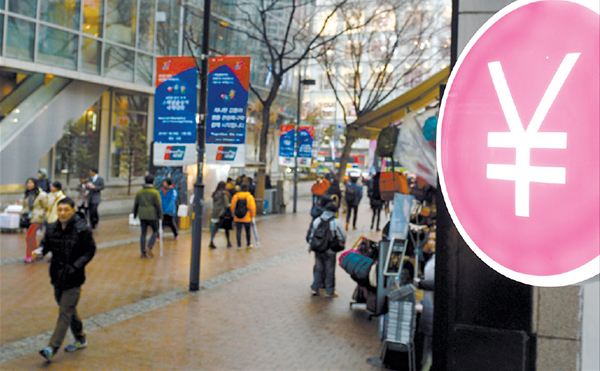 The weakening Japanese yen is hurting Korean retailers and merchants in Seoul’s key shopping hubs as many claim to be making less money from Japanese tourists, who now complain that their prices are too high.

One recent Saturday morning, a 37-year old clothing shop owner surnamed Cho found herself flustered after yet another Japanese couple were set to leave her store in Myeong-dong, central Seoul, without buying anything after complaining the prices were too high. In such situations, Cho may grab the customer and offer them a discount - but she now feels twice the pain when doing so.

Using the friendly Japanese term for “older sister,” a frantic Cho grabbed the woman’s arm and tried to dissuade her from leaving empty-handed. “Onee-san, no! Everything is yasui [the Japanese word for cheap] in Korea!” she said, drawing on her broken Japanese. She ended up giving them a 1,000 won discount on each garment they agreed to buy, cutting her profit in half. She said the number of Japanese visiting her store has halved since November.

“I opened my shop in 1998, but I have never seen so few customers,” said Choi Sook-hee, a 45-year old clothing store owner who runs a shop next to Cho’s. “Some of my colleagues have even had to surrender their shops after failing to pay the rent.”

“We haven’t changed our massage prices since 2005, but many Japanese tourists are now turning away complaining that it’s too expensive,” said Park Young-gil, a 61-year-old massage shop owner. “When business was good, we had Japanese customers coming in at all hours, even 4 a.m.”

Kwon Young-min, 47, who runs a souvenir shop at the Doota shopping mall in Dongdaemun, said the problem is compounded by penny-pinching.

“I come to Seoul at least twice a year to buy fancy clothing at bargain prices, but I always keep the spending limit to 50,000 yen [$560] per trip,” she said. Due to the volatile exchange rate, this means she spent 750,000 won during her last trip in June but will only spend 580,000 won this month.

The Korea Tourism Organization said 220,000 Japanese tourist visited Korea in December, compared to 300,000 in September. And their three favorite destinations in Seoul - Myeong-dong, Dongdaemun and Insa-dong, all in central Seoul - are feeling the pinch, according to the Korea Culture and Tourism Institute.

Since Japanese tourists began flocking to Korea in larger numbers in 2008 they have accounted for about 50 percent of the revenues at stores in the three shopping hot spots.

“The weaker Japanese yen is likely to continue as the main economic pledge of Japanese Prime Minister Shinzo Abe is to increase exports,” said Lee Joon-hyup, a research fellow at Hyundai Economic Research Institute. “Retail and other domestic industries must prepare for this trend to be relatively long-term.”

Sky Lake, which sells herbal therapy cosmetics in Insa-dong, is also seeing fewer visitors. When it was introduced in Japanese magazines and TV last summer, it typically saw lines of Japanese queuing up outside its premises. “They used to buy two or three of each product, but now they just buy one,” said the store manager.

Private forex dealers in Myeong-dong are also unhappy about the weakening yen as they are seeing fewer punters from Japan.

“The daily volume of yen we exchange for Korean won has halved since last year,” said Choi Byeong-gik. “Before they’d ask to change 100,000 yen, but now they hand me notes of 10,000 yen or 20,000 yen after peeking at the foreign exchange rate board I put up.”