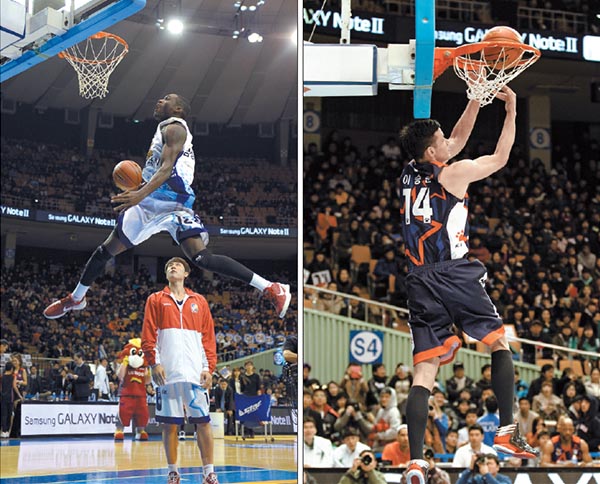 Juan Pattillo of Anyang KGC was named MVP of the Korean Basketball League All-Star Game yesterday after he led his Magic Team’s rally in a 120-118 victory over the Dream Team.

Rod Benson of the Sakers led the Dream Team with 25 points and 13 rebounds.

Pattillo, who is leading the league in dunks, also won the All-Star slam dunk contest over Benson in a unanimous decision. Pattillo has recorded 2.17 dunk shots per game on average this season, compared with 1.51 for Benson.

The Western Kentucky University graduate who joined the KBL this season is fourth in scoring with 18.4 points per game.

Two slam dunk contests were held - one for foreign players and another for Koreans. Lee Seung-joon of the Promy won the domestic slam dunk title in a four to one decision against Kim Hyun-min of the Busan KT Sonic Boom. Lee has led local players this season in rebounding with 6.6 per game.

The KBL teams, which play 54 games during the regular season, have completed 41 or 42 so far. The Seoul SK Knights are leading the league, four games ahead of second place Ulsan Mobis Phoebus.

Regular play will resume Wednesday with two games, the Incheon ET-Land Elephants versus the Sakers and the Jeonju KCC Egis against the Goyang Orions.

The six-team playoffs will start in March.