QPR gets a beating, tongue-lashing

QPR gets a beating, tongue-lashing 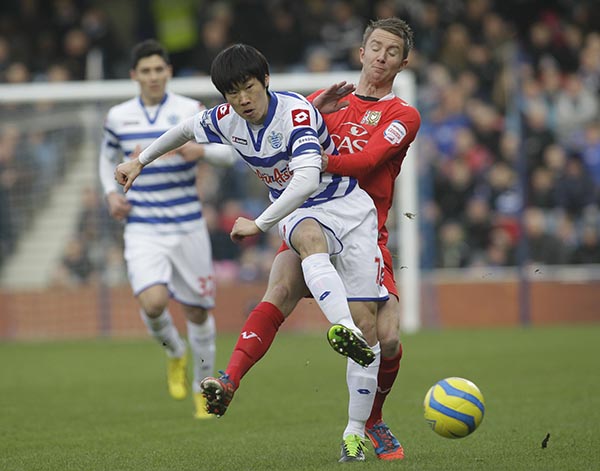 QPR’s Park Ji-sung competes with the MK Dons’ Dean Bowditch during their English FA Cup fourth round football match Saturday at Loftus Road stadium, London. QPR, currently at the bottom of the Premier League, was beaten soundly by the third-tier Dons. [AP/YONHAP]

LONDON - Harry Redknapp was “disgusted” after his Queens Park Rangers were humbled 4-2 at home by the third-tier MK Dons in the fourth round of the FA Cup on Saturday.

Redknapp made nine changes to the side that drew 1-1 with West Ham United in the Premier League last weekend, saving some of his top players for the relegation battle, but the plan backfired in spectacular fashion as they trailed 4-0.

Late goals from former Manchester United defender Fabio and Jay Bothroyd spared the Premier League’s bottom club from complete humiliation, but not some harsh words from their coach.

“It was bitterly disappointing. There’s no excuse for conceding four goals at home today to MK Dons - it’s disgusting,” said Redknapp, who won the FA Cup with Portsmouth in 2008 and took Tottenham Hotspur to the semifinals last season.

Despite all the changes, QPR still included experienced Premier League players such as Park Ji-sung and Anton Ferdinand and boasted seven internationals.

Redknapp, whose team is five points from safety in the league, said it underlined his fears about the squad he inherited from the sacked Mark Hughes.

“I played the players that haven’t been playing recently,” Redknapp said. “Today answered a lot of questions.

“I already knew the answers to those questions, but for some it confirmed it.

“A lot of them have been knocking on my door telling me that they should be in the team. I gave them the chance and this is the problem - we’re not strong enough.

“That’s why I’ve been all over Europe over the past two weeks, trying to find players to strengthen the squad.”

While Redknapp fretted over his squad, MK Dons, the club controversially formed from 1988 Cup winners Wimbledon, celebrated reaching the fifth round for the first time after an own goal from Armand Traore and efforts from Ryan Lowe, Ryan Harley and Darren Potter fired them into a 4-0 lead.