Park clashes with Lee over pardons

Park clashes with Lee over pardons 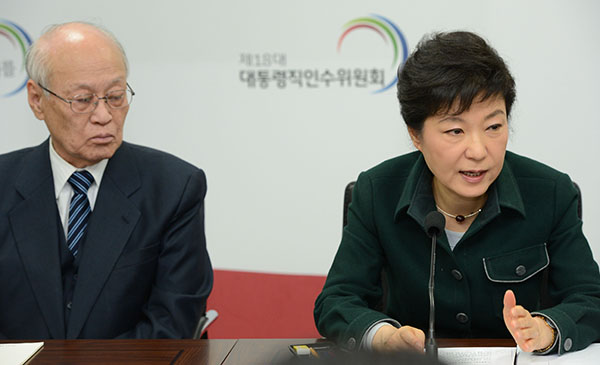 President-elect Park Geun-hye, right, makes an opening remark yesterday at the state affairs debate session on the economy hosted by the presidential transition team in its office in Samcheong-dong, central Seoul. Kim Yong-joon, prime minister nominee and head of the transition team, left, has come under fire for suspicious real estate purchases using his two sons’ names when they were under 10 years old. Kim has yet to respond to the accusations. [NEWSIS]

President-elect Park Geun-hye clashed with outgoing President Lee Myung-bak over granting special presidential pardons to convicted politicians and businessmen, an unusual scuffle with the current administration ahead of her inauguration.

Incoming President Park has vowed to limit the presidential right to issue pardons as part of her reform pledges.

“Granting pardons to those involved in corruption will prompt public anger. We hope [President Lee] won’t grant those kinds of pardons,” Yoon Chang-jung, a spokesman for Park’s transition team, said at a briefing on Saturday. Asked if that was Park’s position, Yoon said, “As a spokesman, I fully discussed the matter with the president-elect.”

The criticism from the president-elect was unusual. She has been cautious in tackling current issues until she is officially sworn in at the end of next month.

Following the announcement, the Blue House convened an emergency meeting on Saturday to discuss further measures.

Although the Blue House didn’t release an official response, a senior presidential official refuted that giving special pardons is “an original right of the president” that can’t be hindered by the president-elect.

“We have fixed our position on special pardons before the Lunar New Year’s Day, as initially scheduled,” the official told Yonhap News Agency on Saturday.

Another official also told Yonhap yesterday that most of the procedures for the pardons have been completed.

Sources told the JoongAng Ilbo that those listed for pardons include: Choi See-joong, former head of the Korea Communications Commission and a political mentor to President Lee who was convicted of graft charges involving the so-called pi-city construction project; Chun Shin-il, former chairman of Sejoong Namo Tour who used his influence to ease a tax probe on Taekwang Industrial; Kim Hee-jung, a former presidential secretary who received kickbacks from debt-ridden Solomon Savings Bank; Kim Jae-hong, former KT&G welfare foundation chairman and cousin of the first lady who was granted kickbacks from troubled Jeil Savings Bank.

However, the president’s elder brother Lee Sang-deuk, who was sentenced to a two-year jail term on charges of receiving bribes from savings banks and a conglomerate, was not put on the list because he appealed the ruling on Friday, a day after he was sentenced.