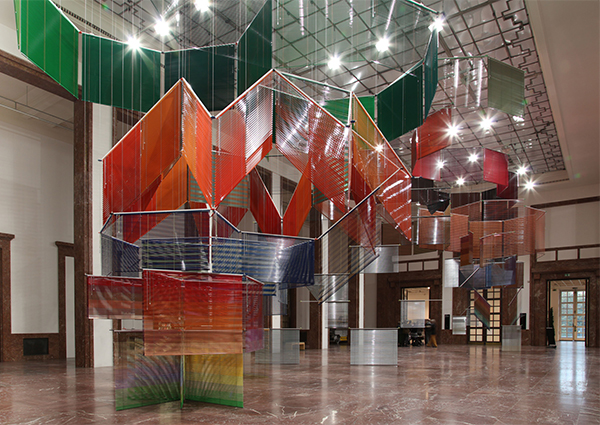 Haegue Yang’s installation, commissioned by the Haus der Kunst in Munich for its Middle Hall. Provided by Kukje Gallery


Haegue Yang, the inaugural artist for this year’s commissioned art program at Germany’s Haus der Kunst, has created a giant installation to be displayed at the museum until mid-September.

“Accommodating the Epic Dispersion ? On Non-Cathartic Volume of Dispersion” consists of Venetian blinds hanging from the ceiling in the 41-year-old artist’s signature style.

“Depending on the angle of approach, the blinds overlap in a varying number of layers, and the interplay of light and shadow changes depending on the location,” Haus der Kunst explained in a release. “At times, the installation appears completely opaque, and at others, completely translucent.”

The title of the installation work “alludes to Haegue Yang’s inspirations, which lie in the literary processing of migration and diaspora,” the museum added.

Yang was born in Seoul and has lived mainly in Germany since 1994. Accordingly, she is “well aware of the challenges faced by those living in a foreign country” and her work “explores migration and uncertainty,” the museum said.

Yang represented the Korea Pavilion at the 53rd Venice Biennale in 2009 and participated in dOCUMENTA (13) in Kassel, Germany, early last year.

According to Kunst der Haus, the Middle Hall, once called the “Ehrenhalle,” or Hall of Honor, during the Nazi regime (1933-45), is located at the heart of the museum and is open in design as if it were a public plaza. Every year until 2022, the museum will commission an artist to make a site-specific work for the hall. Yang is the first.