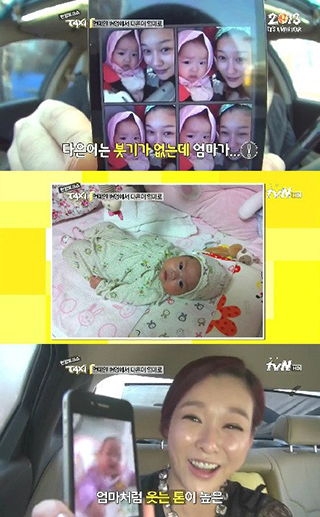 Entertainer Hyeun Young revealed a picture of her baby girl for the first time to the public.
The 36-year-old TV personality who has spent most of her married life, dating back to early last year, getting ready for her motherhood made a rare appearance on tvN’s “Taxi.”

In the show that aired Jan. 28, the model-turned-actress flaunted a picture of her 5-month-old daughter.
When asked if she would mind if her daughter went under the knife, as she did herself, Hyeun made the hosts laugh by saying, “I’m doing all that I can for her now so that she won’t need to.”
At home massages are one of the techniques deployed by the cosmetic surgery aficionado for her new bub.

Hyeun, once known for her flair for fashion, said that right now all she could think about was her baby girl.
“I used to shop for bags and clothes, now the only things I buy are baby items.”
Hyeun shocked all when she announced wedding plans last January and followed through in March.
In August she gave birth to her first child.