Another suspect escapes from police

Another suspect escapes from police 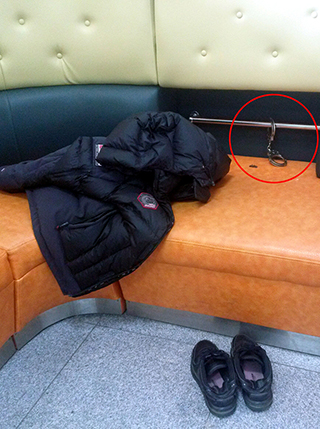 The photo shows the handcuffs the suspect slipped out of and the shoes he left behind after escaping from a police station in Jeonju, North Jeolla on Monday morning. [NEWSIS]

A 30-year-old theft suspect slipped out of his handcuffs and escaped barefoot from a police station in Jeonju, North Jeolla, causing public concern over lax handling of arrested suspects.

The latest escape comes barely a month after another suspect Roh Young-dae, accused of sexual assault, managed to break out of the police station in Ilsan, Gyeonggi, and stayed on the run for six days before he was caught.

The Wansan Police Precinct in Jeonju reported Monday that the suspect, identified by his surname Kang, was being questioned by the police for breaking into a car in a parking lot and stealing a smartphone and about 800,000 won ($739) in cash at around 3 a.m.

The fugitive slipped out of his handcuffs after he begged a police officer to loosen them because they were too tight, the police said. The robber was wearing black pants and a green shirt. The authorities reported there were five police officers at the station at the time of the escape.

A manhunt ensued but the police failed to grab him and dispatched over 500 men in pursuit of the suspect. The authorities also placed Kang, who has been convicted six times for theft, on the wanted list. “We heard the doors slam and realized he had escaped,” one of the police officials at the site told the JoongAng Ilbo.

The police reported Kang met with his girlfriend yesterday at his studio apartment in Wansan District, Jeonju. She told him to turn himself in. Kang refused and is still on the lam.

The escape is another embarrassment for the police as they have recently instructed officials to make sure they maintain high readiness to prevent such embarrassing incidents.