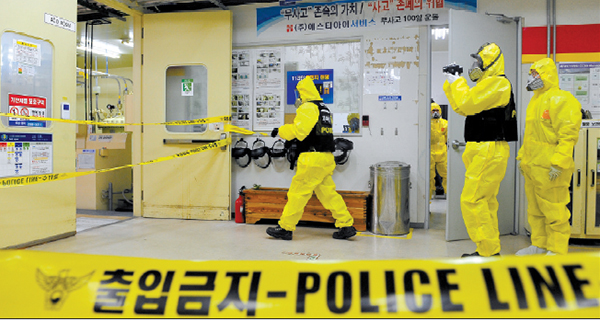 Inspectors dispatched to Samsung Electronics’ chip-making plant in Hwaseong, Gyeonggi, conduct their on-site inspection yesterday to collect evidence on a fatal hydrofluoric acid leak that killed one worker and injured four others on Monday. [NEWSIS]

The police are set to look into the fatal hydrofluoric acid gas leak that killed one worker and injured four others at the Samsung Electronics’ Hwaseong Plant in Gyeonggi.

They plan to investigate why the leak occurred and why it took more than 24 hours for the mega company to report the case to the authorities.

Hwaseong Dongbu Police Precinct conducted an on-site inspection at the plant yesterday and said it will investigate whether the five workers exposed to the gas were properly wearing protective gear during the repair work.

Samsung Electronics said yesterday that the company first detected the leak in a pipe at 1:30 p.m. Sunday and tightened nuts on the seal of the valve as the first measure.

But after the leak worsened from the aged pipe, the company decided to dispatch five workers of the subcontracted firm STI Service to carry out the repair work on the pipe at around 11:30 p.m.

Hydrofluoric acid is an acute poisonous gas that can cause damage to the lungs and the nervous system. It’s the same type of fatal gas that caused the deaths of five workers at a chemical plant in Gumi, North Gyeongsang, in September last year.

The flagship firm of the Samsung Group said the repair work was done at 4:59 a.m. Monday and the five workers were taken to a Seoul hospital after discovering they had some symptoms related to gas exposure, such as red splotches around their necks.

One of the five workers, surnamed Park, 34, died Monday afternoon.

The other four returned home after treatment but were re-admitted to Hangang Sacred Heart Hospital in Yeongdeungpo District, western Seoul, on Monday night.

In response to growing criticism surrounding its belated report to the authorities of the leak, Samsung Electronics said in its statement that the company held off reporting as the company first deemed the repair work as part of “usual maintenance work” at first before the hospitalization of the five workers and subsequent death of Park.

The firm reported the case to the Gyeonggi Provincial Government at 2:40 p.m. Monday, about 25 hours after it first discovered the gas leak.

Jun Dong-soo, president of the Samsung’s memory chip business, said in a statement released yesterday that the firm will “cooperate thoroughly with the authorities to find out the exact cause and come up with measures to prevent such an incident” in the future and apologized for the leak.