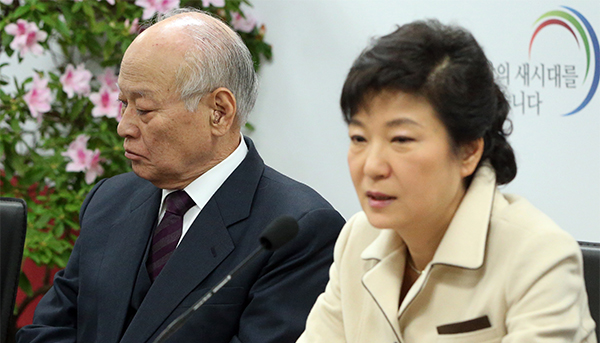 President-elect Park Geun-hye, right, makes opening remarks at a discussion by her transition team yesterday while Kim Yong-joon, the head of the team who relinquished his nomination as Park’s prime minister on Tuesday, listens. [NEWSIS]


President-elect Park Geun-hye yesterday expressed frustration over snowballing criticism on her being too secret in her personnel appointments in the aftermath of the failed nomination of her first choice for prime minister.

At a luncheon with eight lawmakers of the ruling Saenuri Party, Park talked about the difficulty of finding candidates who can survive media scrutiny and National Assembly confirmation hearings, the participants told the JoongAng Ilbo.

“The process of vetting a nominee should be an evaluation of his abilities,” Park was quoted as saying, “but it has become a hunt for every piece of dirt.”

The lawmakers said no specific person’s name was mentioned during the luncheon but it was evident that she was referring to the nomination of Kim Yong-joon as prime minister. Kim withdrew from consideration after the media and opposition lawmakers found alleged skeletons in his closet.

Park refuted the idea that she was too secret in coming up with nominees, not allowing for a proper vetting process by her transition team.

“Should I just leak some names to media when no decision has been made,” she said, “and harm people’s reputations and reduce them to fools?”

Kim, a former constitutional court justice who heads Park’s presidential transition team, was the first prime minister nominee to step down before the legislature even convened his confirmation hearing.

In five days, the media publicized allegations that Kim’s sons avoided military service and were given expensive real estate at very young ages, possible to avoid inheritance taxes Park was criticized for not having found out these problems before nominating him.

Blue House sources said Park did not request personal information on Kim. In 2010, the Blue House created a background check form with 200 questions for nominees for senior positions, but Park didn’t use it.

Another lawmaker who had lunch with Park yesterday said she was dubious about the current administration’s system.

“The fact that Park didn’t know about problems associated with Kim means that she has a hole in her vetting system,” said Lee Chung-hee, a political science professor at Hankook University of Foreign Studies.

The main opposition Democratic United Party urged Park to stop keeping the appointment process to herself.

“Instead of sitting at home and relying on memos from her pocketbook, Park needs to appoint senior officials through an established system,” DUP floor leader Park Ki-choon said.

“Shortcomings in Park’s method focused on secrecy were revealed,” Representative Hong Il-pyo said. “She needs to change and work together with the party leadership.”

“A simple background check could have discovered the allegations against Kim,” said Representative Chung Woo-taik. “There are criticisms that Park’s vetting was too poor and she needs to modify her style.”

While Kim withdrew his nomination, he will complete his job as Park’s transition committee head. Kim yesterday attended a discussion session of the transition team with Park.

Since her first nomination flopped, the clock is ticking for Park to find a new candidate. Park has 25 days before her inauguration on Feb. 25 and the Ministry of Public Administration and Security advised her to announce her prime minister candidate by Jan. 20 and minister nominees by Tuesday, taking into account a maximum 20-day confirmation hearing period.

The timeline was disturbed by Kim’s resignation. Sources from the transition team said selecting minister nominees would be completed before the end of next week.

It appears now that a priority in nominees will be their ability to survive media scrutiny and lawmakers’ grilling. Some observers said Park may retain Prime Minister Kim Hwang-sik because he won’t need to pass a confirmation hearing again.

An aide in Park’s secretariat said that possibility is low because the public would have trouble differentiating her government from the Lee Myung-bak administration.