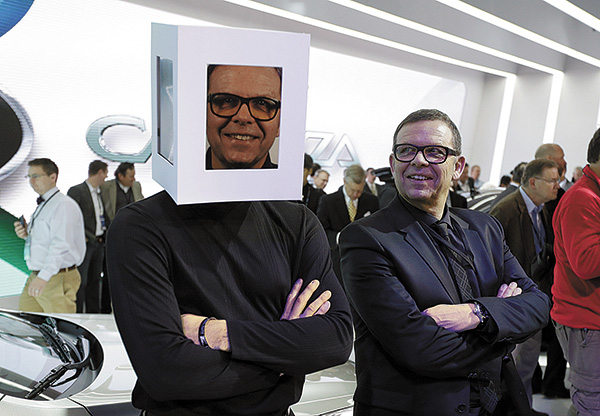 Schreyer, 59, a star designer since the 1990s for work including Volkswagen AG’s New Beetle and Audi TT coupe, got the job on Jan. 13, two weeks after becoming one of Kia’s three presidents and the first who isn’t Korean. Hyundai and Kia Chairman Chung Mong-koo and son Chung Eui-sun, Hyundai’s vice chairman, back aggressive styling, Schreyer said in Detroit.

“They’re really interested in giving Hyundai more distinction and character,” Schreyer said in an interview this month. “It’s a great signal, how much importance they give to design. I think it’s really a daring statement from them.”

The move comes as Hyundai and Kia, among the world’s fastest-growing automakers in recent years, expect slower gains in 2013. Combined sales for the affiliates that share engines and platforms as well as a chairman will grow to 7.41 million vehicles this year, up just 4.1 percent, amid fiercer competition, a sluggish global economy and stronger won, according to company projections.

Schreyer’s arrival at Kia in 2006 coincided with rapid growth in the U.S., fueled by models including the boxy Soul hatchback and midsize Optima sedan. Those vehicles, along with Kia’s streamlined Sorento sport utility vehicle developed under Schreyer, helped more than double U.S. sales from 2008 to 2012, when it delivered a record 557,599 cars and light trucks.

“Kia could not have improved its profit as much as it did, post early 2000s, had it not been for Schreyer,” said Lee Hyung-sil, an analyst at Shinyoung Securities. “A foreigner like Schreyer becoming president and head of a division shows Hyundai and Kia are changing.”

Schreyer “has already shown that he’s the right person for this job” of chief designer for both companies, said Eric Noble, president of the Car Lab, an industry consultant in California. Kia has made “steady and cumulatively successful” progress since Schreyer’s arrival, Noble said.

“He had such good history before he went to Kia, and management in Korea had such a poor reputation for taking in outside direction,” he said. “I don’t think anyone expected him to be as successful there as he’s been.”

Hyundai Motor and Kia have worked over the past decade to shed their image as bargain brands that lag Japanese competitors Toyota Motor and Honda Motor in quality and value. Durability has improved significantly and eye-catching looks keep the Korean cars from seeming like copycats.

“Before Schreyer joined Kia, design wasn’t a priority at the company and the sales and manufacturing divisions were the ones who had power,” Shinyoung’s Lee said. “Post-Schreyer, design became the top priority.”

As a Kia president, Schreyer said he’ll also have a hand in planning future products. The carmaker’s other two presidents are Ahn Byung-mo, who also leads the U.S. sales and production units; and Lee Sam-ung, head of Kia’s Korean operations.

Chairman Chung has set lofty goals for his auto brands. He wants them to rank with the industry’s strongest, and eventually rival German luxury car makers like BMW and Mercedes-Benz.

Toyota President Akio Toyoda is similarly pushing his company, which regained the global sales lead in 2012 from General Motors, to develop cars with edgier looks and handling to appeal to younger buyers and new customers in international markets.

“At one level it’s a sign of globalizing the company to a level it hasn’t been at previously,” Hall said. “That’s what they want the financial community to see.”

Hyundai Motor’s own expansion in the U.S. since 2009 has been driven by restyled models including the Sonata sedan, Tucson SUV and Elantra compact car that highlighted what the company calls its “fluidic sculpture” design theme.

While that approach has been effective, it will have to evolve, said Ed Kim, an industry analyst with AutoPacific.

“Fluidic design really stood out in 2009 and 2010,” said Kim, who is based in Tustin, California, and is a former product planner for Hyundai’s U.S. unit.

Compared with Toyota’s Camry and Honda’s midsize Accord, the Sonata retains a more high-concept appearance, Kim said. “But it’s gone from being cutting-edge to attractive and contemporary.”

Schreyer’s first step in the new job will be reviewing future products in development at Hyundai.

“I have to look at what’s coming, in preparation, to know where we are, said Schreyer, who’s based in Frankfurt. ‘‘Now I have to put a lot of priority on the Hyundai projects, but I don’t want to leave Kia behind. I still want to push Kia forward as much as I can.”

When Schreyer arrived at Kia, the company had never been considered a design leader, Noble said.

“He started with nothing,” Noble said. “This was an organization that didn’t have a brand language, that didn’t have significant studios and certainly wasn’t known as a magnet for talent for the industry.”

Kia is now viewed as one of the industry’s most dynamic for vehicle styling, said Noble, who also teaches at the Art Center in Pasadena, a prominent school for automotive design.

Hyundai is more mature and established while Kia is younger and more aggressive, said Schreyer, who was born in Bad Reichenhall, Germany, and studied at the Royal College of Art in London, before joining Audi in 1980. A fixture at global auto shows, Schreyer favors thick-framed, owlish glasses, black suits, striped socks and black Beatle boots.

“Each of the two has their own strong direction,” he said. “I think that Kia is more architectural and Hyundai is a bit more sculptural, opulent.”

While Hyundai’s “fluidic sculpture” was well received in the U.S., markets including Korea weren’t as receptive, said Lee Sang-hyun, an analyst at NH Investment & Securities.

“Opinions varied. Some liked it and some didn’t,” Lee said. “Schreyer is expected to improve Hyundai’s design and ultimately enhance the brand image and identity of both Hyundai and Kia.” Bloomberg