Trendy brooches made with a hint of nature

Trendy brooches made with a hint of nature 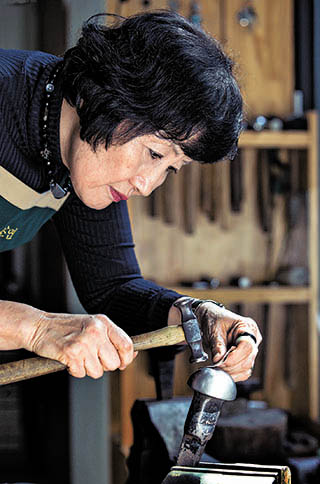 Kim Seung-hee works with a hammer at her workshop in Hunjeong-dong, central Seoul. [JoongAng Ilbo]

Kim Seung-hee works with metal for a living, and since retiring from her professorship at the College of Arts at Kookmin University, she’s been working to create a legacy in the world of Korean metal craft.

In a recent interview with the JoongAng Ilbo at her workshop in Hunjeong-dong, central Seoul, she was busy with her hammer but still took the time to share the story of her brooches and other work dubbed by critics as “featuring quintessential Korean landscape.”

It was actually in the 1980s that Kim’s pieces first grabbed people’s attention. This was after she graduated from Seoul National University, where she majored in art, and then attended graduate school at Indiana State University in the United States.

“One famous jeweler who had a business in a hotel arcade asked me to make some Korean traditional tableware for a special exhibition in 1983,” the 66-year-old recollected. “So I made pieces such as bansanggi [a traditional Korean set of dishes for a table], a container for gujeolpan [Korean dish consisting of nine different foods], a steamer, silver spoons and a candleholder. The title of the exhibition was ‘Dinner in May.’?” 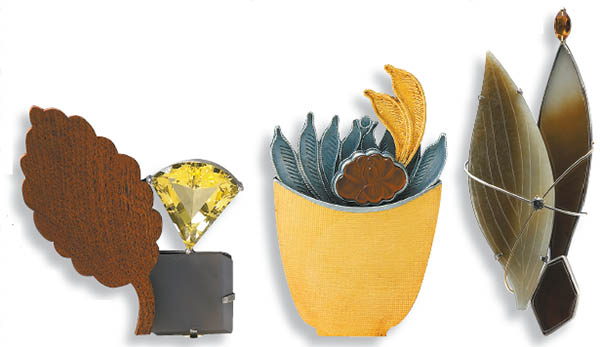 Her pieces, mostly brooches as shown above, are all inspired by traditional Korean landscapes and use materials like silver, jade and blue sapphire. She says her goal is for people to carry “Korean nature” over their hearts. [JoongAng Ilbo]

Only the privileged few with a good eye and a great deal of money could purchase these hand-crafted pieces. Kim said her clients included people like Lee Soon-ja, the wife of President Chun Doo Hwan. In fact, this is how her works became coveted among wealthy homemakers.

And yet as she succeeded commercially, Kim struggled to make pieces that interested her personally as an artist.

She said that although she loved working on silver tableware and other lifestyle products, they did not appeal to a wide range of people and there were not many places that would put them on display.

Her big break, though, came as she remained true to her creed as an artist.

In 1987, she held an exhibition titled “Endless Thoughts” through which she introduced her now famous brooches.

“I began thinking that because I had already made so many regular containers, I could start making containers without bottoms too,” she said.

Her first brooch on display was shaped like a container, but without a bottom.

And from that moment on, customers started to recognize the brooches she made. Today, they are a household name. Especially among wealthy women, having a Kim Seung-hee brooch is unmistakable proof of sophistication and good taste.

Initially made with pure silver, Kim now creates the brooches with a mixture of materials like onyx and amber.

Kim is particularly proud of reviews that have praised her pieces for features that resemble the Korean landscape.

“It’s exactly what I intended to do - to keep expressing our mountains and nature on lifestyle products and then on brooches,” she said. “When people nickname my brooches, ‘nature hanging on people’s chests’ or ‘Korean landscapes,’ I feel so proud.”

In a certain sense, wearers actually embrace the landscape on the jewelry, she said.

The artist always emphasizes that brooches, though jewelry, can carry deeper meanings.

“Former U.S. Secretary of State Madeleine Albright had more than 300 brooches,” Kim explained. “She used different brooches to convey different messages every day. Brooches are a kind of accessory that is easily visible, even if it is quite tiny.

“I hope people will choose a brooch after thinking of who they are and how they would like to present themselves.”

As brooches have caught on, others have tried to join the trend, even by copying Kim’s work.

“I saw people selling imitations of my brooches at Namdaemun. In fact, I heard some people calling my brooch ‘Tiffany of Namdaemun,’?” Kim laughed.

The imitations are produced with tin or plated with silver and sold at a hundredth of the price.

But Kim said the imitations don’t bother her at all, and in fact, sometimes flatter her.

“They are different anyway,” she said. “They are new creations in a way. Also they are really well-made and quite popular.”

She has never been a proponent of exclusivity in the creative arts, and is currently working on projects meant to help young jewelry designers plan their careers.

“It is no use if a piece is not in sync with the time and the people. It breathes in life only after people feel and enjoy the piece,” she explained. “With a ‘piece,’ an artist can do anything. But with an ‘accessory,’ an artist should think about the user’s needs and the product’s functionality. So if you compare a large piece and a small accessory, I’d say the latter is much harder and more complicated.”

Kim already operates a workshop near her own that is open at no cost for young and upcoming metal artists.

She is also thinking of more projects to better support younger jewelry designers in between her own work.