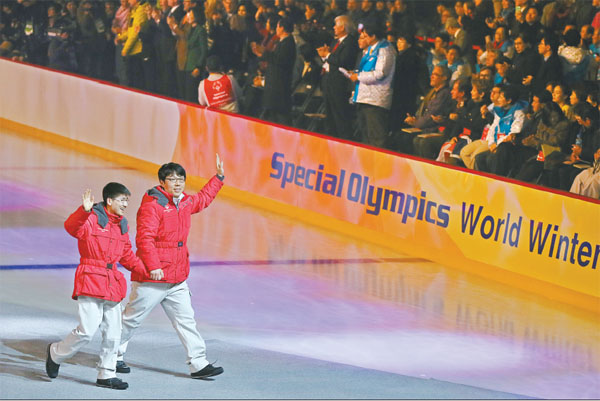 Korean athletes parade during the closing ceremony of the 2013 Pyeongchang Special Olympics World Winter Games at the Yongpyong Dome in Pyeongchang, Gangwon, yesterday. A total of 3,003 athletes from 106 countries took part in the eight-day event. [YONHAP]


The Special Olympics World Games wrapped up in Pyeongchang, Gangwon, yesterday with festivities graced by sports stars and a call for everyone’s right to enjoy athletics to be respected.

During the closing ceremony at Pyeongchang’s 3,761-seat Yongpyong Dome, thousands of athletes and delegates from around the world celebrated the end of the eight-day run of the 2013 Pyeongchang Special Olympics World Winter Games.

The show, in which they were later joined by 18 figure skaters with intellectual disabilities, was performed to Mariah Carey’s “Hero,” underscoring the message that all 3,003 athletes from 106 countries are winners.

“We have written a new chapter in history,” said Na Kyung-won, the chair of the organizing committee, in her closing speech.

Na said the Special Olympics World Games, held in Korea for the first time, has lifted public awareness of the event from almost zero two years ago - when Korea won the hosting rights - to nearly 70 percent. More than 180,000 Koreans visited Pyeongchang to see the competitions, she said.

“The Special Olympics are no longer a festival for the athletes but for the whole world,” she said.

Launched in 1968 by Eunice Kennedy Shriver, sister of former U.S. President John F. Kennedy, the Special Olympics are designed to improve the lives of people with disabilities by showcasing their physical talents.

The World Games, the biggest of their kind, have been held every two years. The next games will be in Los Angeles in the summer of 2015. Pyeongchang officials delivered a flag to the Los Angeles delegation during the closing ceremony last night.

Timothy P. Shriver, incumbent CEO of the Special Olympics, thanked Pyeongchang for hosting the event successfully. “The games will close, but they have opened us to our power, our joy, our reckless bravery,” Shriver said in his closing speech before the flame from the torch, which had been brought from Greece and had burned continuously during the event, was extinguished.

“Let us imagine the world we want to live in and starting now, let us build it,” Shriver said.

“The revolution has begun anew. Watch out world ’cause here we come!”

Many other sports stars from home and abroad participated in friendly events during the Pyeongchang Games, helping bringing more public attention to the event. Lee Bong-joo, the 1996 Atlanta Olympics marathon silver medalist, was one of them.

“The special Olympics is no different from the Olympics with those without disaiblities in that they overcome difficulties and realize their goals,” Lee told the JoongAng Ilbo. “I learned many things from the athletes that I ran with, in particular from their drive to overcome challenges despite their condition.”

More than 100 people with intellectual disabilities also attended the event as volunteers, including Yang Ju-myeong, 23. “I have a similar disability to those athletes, so I shared a lot with them,” Yang said.

The Jan. 30 Global Development Summit, which was held for the first time in Special Olympics history, highlighted the spirit of the event and was attended by participants including Myanmar opposition leader Aung San Suu Kyi. The “Pyeongchang Declaration,” which was adopted at the conference, called for action to make a “better world for persons with intellectual disabilities.”

Delegations from the seven countries that had never competed in the Special Olympics were also invited via Pyeongchang’s “Special Hands Program” and three athletes from them - Nepal, Pakistan and Cambodia - won gold medals in snowshoeing.

The Games, which served as a dress rehearsal for the Winter Olympics and Paralympics the city will host in five years, also revealed some challenges for the hosts to address such as a lack of transportation, a need for a better information system and more interpreters for delegations from non-English-speaking countries. Pyeongchang officials said they will try to address the problems.

As of Monday, Korea won 55 gold medals in 243 events, the best result for Korea since the country fielded its first delegation for the Special Olympics Winter Games in 1997.