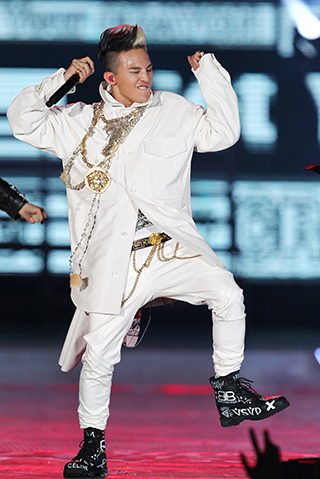 Big Bang’s G-Dragon has again shown that he’s got what it takes to be the leader of the renowned Hallyu band.

The rapper best known for his eclectic style has added two more venues to his Japan Dome tour to meet high demand from fans.

YG Entertainment announced that to meet fans’ requests, G-Dragon penciled in performances at the Osaka Dome and the Nagoya Dome. In total, he now plans five dome concerts in April.

“In all, he’ll entertain some 361,000 fans through the dome tour,” said a spokesperson from YG. “Thus not only will he become the first Korean male soloist to take on so many domes, but he’ll also set the record for the largest audience for a K-pop male singer.”

Ahead of the tour, set to begin April 6 in Saitama, G-Dragon will dazzle fans at home on March 30-31 at solo concerts in Olympic Park, southern Seoul.

G-Dragon is as big on his own as he is with Big Bang. His solo album “One of a Kind,” released in September, topped several music charts in Korea. By Carla Sunwoo