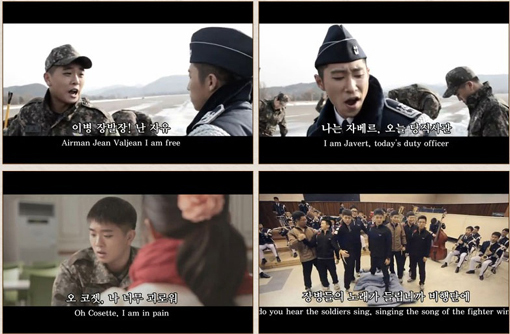 Russell Crowe better watch out as he may be more replaceable than he thinks. The Korean Air Force has released a 13-minute clip based on the musical-turned-film “Les Miserables” that features Korean soldiers in place of Crowe and his Hollywood counterparts.
The video opens with soldiers shoveling snow and singing to the opening “Work Song,” with lyrics modified to fit the situation — soldiers being overworked due to heavy snowfall.
The Air Force’s YouTube channel describes the plot as a military parody that tells the tale of star-crossed lovers: a boyfriend who is in the Air Force and must choose between duty and love, and a girlfriend who braves icy weather to see her lover.
The clip took 40 soldiers a month to produce, according to the Air Force, and two weeks to record. It is subtitled in Korean and English.
A soldier who took part in the production said that the clip sought to capture “the sorrow felt by servicemen during snowfalls”
As of yesterday at noon the clip had amassed more than 360,000 views.