Treasuries travails are not over yet

Treasuries travails are not over yet 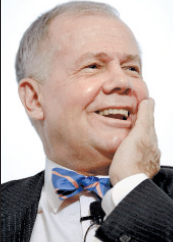 Investor Jim Rogers joined Bill Gross, who runs the world’s biggest bond fund, in warning that a rout that sent Treasuries to their biggest loss last month in almost a year probably isn’t over.

“Everybody wants to be in equities,” said Hans Goetti, a Singapore-based chief investment officer for Asia at Finaport Investment Intelligence, which manages the equivalent of $1.54 billion. “People are moving out of Treasuries.”

The price of the 1.625 percent note due November 2022 was 97. The yield dropped to a record low of 1.38 percent in July, raising concern that bonds don’t offer enough value.

United States inflation may pick up in 2014 to 2016, Pimco’s Gross said earlier this month on Bloomberg Radio. Faster inflation “will create an upper drift in long-term yields,” Gross said.

The difference between yields on 10-year notes and same-maturity Treasury Inflation Protected Securities, a gauge of trader expectations for consumer prices over the life of the debt, was 2.55 percent. The figure compares to the average over the past decade of 2.19 percent and the current inflation rate of 1.7 percent as measured by consumer prices.

Treasuries have handed investors a 0.9 percent loss this year as of Wednesday, according to Bank of America Merrill Lynch indexes. They finished January down 1 percent, the steepest monthly loss since March.

The rate will increase to 2.25 percent by year-end, according to a Bloomberg survey of financial companies, with the most recent projections given the heaviest weightings. An investor who buys today would suffer a 0.6 percent loss, according to data compiled by Bloomberg.

The S&P 500 gained 6 percent this year. It is within 5 percent of its record high reached in October 2007. Sovereign bonds in the nation have returned 0.2 percent in 2013, the Bank of America data show.

“At best, bond yields will move sideways in the next several years but it would not be surprising if yields trend higher,” James W. Paulsen, chief investment strategist at Wells Capital in Minneapolis, wrote in a report Wednesday. “While bonds have provided very competitive returns relative to the stock market since 1980, this era has probably ended.”

The Fed said Jan. 30 it is committed to buying about $85 billion of government and mortgage securities a month as long as the jobless rate stays above 6.5 percent and inflation is below 2.5 percent. Unemployment rose to 7.9 percent in January and consumer-price gains remain below the central bank’s target. The U.S. economy contracted 0.1 percent in the fourth quarter.

The Labor Department also revised its jobs figures for November and December higher. Revisions added 127,000 jobs to the tally in the last two months of 2012.

A government report yesterday will probably show initial claims for jobless insurance declined last week, based on a Bloomberg News survey of economists before the data at 8:30 a.m. in Washington.

“Am I concerned that we could be in a bond bubble sometime in the future? Yes, I’m concerned,” Cohn said this week in a Bloomberg Television interview in Hong Kong. “At some point, it’s not going to be the best market to be invested in.”