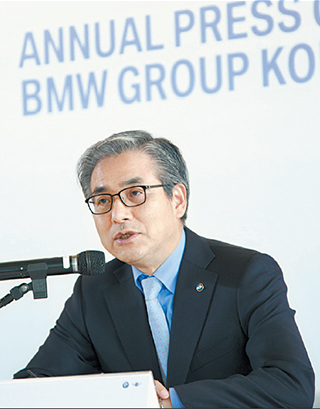 Korea is the No. 10 market within the BMW Group, ahead of Spain, Australia and South America, according to Kim. And the local unit again received the best score of any division in the BMW Group annual evaluation for the fourth time in nine years.

“2012 was a successful year that allowed us to have balanced and stable growth,” Kim said. “But we are not going to be satisfied with the result, and we will push forward.”

The German automaker was the No. 1 foreign brand in Korea last year, selling 28,152 cars for a year-on-year increase of 20.9 percent. Its affiliate Mini sold 5,927 units, a jump of 32.8 percent. The combined sales of BMW and Mini account for more than 26 percent in the imported car market, according to the Korea Automobile Importers and Distributors Association. 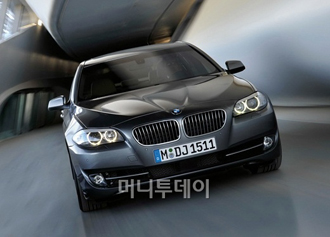 The company continued that strategy in 2013, importing 3-Series GT, the new Z4, and four-door M6 Gran Coupe by June. It also will introduce the new X5 and 5-Series, as well as the 4-Series Coupe designed by Korean Kang Won-kyu. Next year, BMW Korea plans to bring its i3 and i8 electric vehicles to Korea.

Even with the new lineup, Kim said BMW Korea is looking to increase 2013 sales by a “moderate” 10 percent while focusing on internal issues.

With a weakening yen and slumping Europe, economic conditions will be challenging, but the CEO emphasized that it also raise awareness of other ways to stay competitive.

“These days, customers are not only looking at price, fuel economy and maintenance costs, but also brand, performance and service quality,” Kim said. “We will put our best effort into education and training to make our eight dealers and 3,000 employees ambassadors for BMW.”

The company also intends to bolster its contributions to Korean society. This year, BMW Korea will set up a program to nurture future engineers by mentoring high school students and begin construction of a BMW Driving Center in Incheon.

“We are looking for a sustainable growth with society,” Kim said. Kim added that BWM Korea is also ready to help small- and medium-sized businesses, 16 of which are first-tier suppliers for BMW Group.

“Germany is looking for Korea’s SMEs with high-level technologies in telecommunications and electronics that can relate to automobiles,” Kim said. “In the future, it’s going to be about who has the best network, and BMW Group wants to find good SMEs so we can grow together.”