There’s plenty in store for Seollal

There’s plenty in store for Seollal

Multicultural families in Korea celebrate the Lunar New Year by playing yutnori, a Korean traditional board game, at an event organized by the Korea Multicultural Society last year. [JoongAng Ilbo]


As the country gears up for its second celebration of the new year, there are plenty of events in the works for those who want to get out of the house.

Koreans consider the Lunar New Year, which falls on Sunday, and the accompanying three-day holiday to be a time for family gatherings and remembering traditions. People dress in hanbok (traditional dress), hold ancestral rites, play historical games and eat special dishes. Eating tteokguk (soup with thinly sliced rice cakes) is said to add another year to your age.

In recent years, many families have simplified the celebration and, some fear, grown forgetful of the traditions underlying Seollal. Some have particularly criticized younger people for neglecting the holiday.

Here are several traditional ways to reconnect with the Lunar New Year and spend the holiday, which runs from today to Monday.

Those who want to see how ancestors celebrated the Lunar New Year should visit local palaces. At Gyeongbok Palace, visitors will be able to celebrate the holiday by bowing to parents at rooms inside the palace. The palace is also open for free to visitors tomorrow.

At Changdeok Palace, officials said they will invite 30 elderly people without families from a nearby community center tomorrow and give them a guided tour of the palace. Employees will also perform New Year’s bows for the guests and present them with a drawing that is believed to fend off evil spirits. Visitors can also drink Asian apricot tea in the garden.

Deoksu Palace said it will share traditional food used in ritual ceremonies for ancestors with its visitors tomorrow. Those wearing hanbok will also receive Korean biscuits.

Meanwhile, shrines in the Gyeonggi area have organized folk games for visitors. Events will be held at Yeongneung in Hwaseong; Donggureung in Guri; Gwangneung and Hongneung in Namyangju; and Youngneung in Yeoju. Hyeonchungsa Shrine in Asan and the Cemetery of Seven Hundred Righteous Fighters in Geumsan, both in South Chungcheong, have also arranged exciting events.

Visitors wearing hanbok will be admitted free of charge to the four major palaces and the shrines for three days from today.

Game-playing events will be held twice a day at Samcheonri Hill inside the theme park.

In addition, families of two or more can do the limbo, and all visitors can write wishes on balloons and launch them outside.

As for traditional performances, character dolls will form a pungmul (percussion) band. Band members will play traditional instruments such as the janggu (double-headed drum), kkwaenggwari (small gong) and jing (large gong). On Monday, Korean traditional dancer Jeong Ju-mi will hold a performance with others at the plaza in the heart of Seoul Land.

Lotte World, the “Land of Hopes and Dreams,” has also decided to go traditional for the holiday. Until Monday, a play is on offer that tells the Korean folktale of a magpie celebrating the New Year in its own way.

The beats of a samulnori team, a traditional percussion quartet, will also spice up the mood along with a sangmo dance performance, which is a representative Korean folk dance using a twirling sangmo (helmet-like hat with long ribbon).

Traditional games will be available to visitors at the theme park during the holiday each day at 3 p.m, and a professional calligrapher will draw selected family mottos.

Foreigners can participate in a special talent show tomorrow at 6 p.m.

The park invites foreigners without kin in Korea to enjoy themselves so that they do not feel gloomy while others are busy with family festivities.

Everland in Yongin, Gyeonggi, has organized 12 different traditional games for families with children to enjoy.

Workers at Everland will be adorned in colorful hanbok to take pictures with guests free of charge.

A kite expert will also be available to teach children, while adults can have a go at making tteok (rice cake).

The taekwondo and percussion performance “Bigabi” will be staged twice a day at the Grand Stage.

At the COEX Aquarium, guests can watch divers play folk games with sardines under water. Three divers and sardines will bow to visitors and play neolttwigi, or Korean see-saw, standing up.

At Jeonju Hanok Village, various events will welcome visitors looking for a traditional way to spend time with their families during the holidays.

Guests can have a go at playing folk games while making traditional food and handicrafts to take home as gifts.

At the traditional culture center within the hanok village, visitors can participate in a yutnori competition, make their own kites, eat traditional food and learn folk songs.

At the Handicraft Exhibition Center, visitors can make numerous items with hanji, or traditional Korean paper handmade from mulberry trees.

At the Choi Myung-hee Cultural Center, visitors can write letters to themselves to be sent a year later by the center.

Drinkers can enjoy themselves at the Traditional Alcohol Museum and try the alcoholic beverages brewed by the museum. Classes also teach how to make makgeolli, or Korean rice wine.

At the Korea Tourism

At the Korea Tourism Organization Center in central Seoul, numerous activities have been organized for foreigners residing in Korea.

The center has been teaching foreigners how to play folk games since Thursday and has hanbok on hand to try.

At an origami event, participants can fold a lucky bag traditionally used by Korean children to carry cash gifts received during the Lunar New Year. 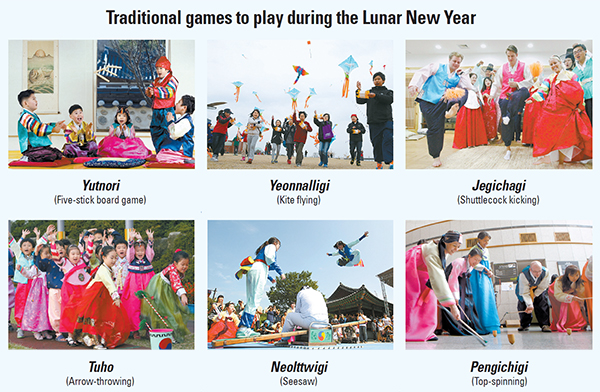 Yutnori(Five-stick board game): Yutnori is a traditional stick-throwing game. Five sticks representing “do,” “gae” “gul” “yut” and “mo” get thrown in the air in turns. The five sticks act as dice to move the tokens on the board.

Yeonnallig(Kite flying)i: Koreans don’t just fly regular kites during the Lunar New Year. They write well-wishing phrases or symbols on their kites and fly them as high as they can to wish for health and happiness. They also play games by competing to see who can cut another’s kite string first.

Jegichagi(Shuttlecock kicking): This is a Korean version of shuttlecock in which a player kicks a jegi up in the air and has to keep on kicking to prevent it from falling to the ground. It’s a one-versus-one game, and the player with the most consecutive kicks wins. Jegi looks like a badminton shuttlecock and is made of a small coin with paper or cloth attached to it.

Tuho(Arrow-throwing): In this game, players throw arrows into a narrow-necked jar. It used to be a form of entertainment for aristocrats in royal courtyards and noblemen’s residences. Each team tries to see how many arrows it can shoot into a vessel.

Neolttwigi(Seesaw): This is a Korean version of seesaw that is played standing up. The object of the game is to stay on the seesaw through a series of jumps without falling down.

Pengichigi(Top-spinning): In this game, players try to knock over the opponent’s spinning top. The person whose top is still spinning is the winner. Pengichigi is popular during the Lunar New Year as the top spins very quickly on the icy ground.