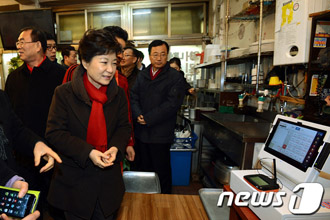 With less than three weeks until President-elect Park Geun-hye begins her administration, she has been criticized for retreating from her main welfare pledges, which include providing elderly people with monthly subsidies and expanding health insurance to cover four major illnesses, such as cancer.

Four civic groups, including Elder Union and My Welfare, gathered on Thursday in front of the presidential transition team’s office in Samcheong-dong, central Seoul.

They urged Park and her transition team to carry out her two main welfare pledges of giving out monthly allowances of 200,000 won ($182.54) to all people over 65 years old, regardless of their income, and also covering the medical costs for four major categories - cancer, heart disease, brain disorders and rare diseases - as the president-elect pledged during her campaign last year.

The civic groups complained yesterday that Park is retreating from her original pledges and that she is succumbing to the plans after facing hardships in realizing the pledges due to budget concerns.

Group members said that initially Park had pledged to give out 200,000 won every month to all senior citizens, regardless of income levels, but now she is trying to give subsidies based on how much each citizen makes.

They also pointed out that Park is trying to walk back her initial pledge of the government paying for additional medical fees that are not covered by insurance when receiving treatment for four major ailments.

Additional medical fees include the medical costs of selected treatments and nursing fees.

The Federation of Korea Trade Unions also released a statement on Wednesday, criticizing the president-elect for taking a step back from her welfare promises.

According to an analysis by the JoongAng Ilbo comparing Park’s pledges made when she was a presidential candidate and remarks made either by her or her transition team, there is a high possibility of the president-elect retreating from her two main welfare pledges.

In her presidential election pledge book, she promised that all senior citizens over the age of 65 will receive double the amount of subsidies they currently receive every month.

But an official from her transition team told the JoongAng Ilbo last month that the incoming government “is planning on giving out subsidies differently [based on income level].”

When her rival Moon Jae-in of the Democratic United Party asked her on Dec. 16 during their third television debate whether 1.5 trillion won is sufficient to cover nursing fees and selected medical fees with insurance, Park said yes.

An official from her transition team, however, said “expressions like ‘all senior citizens,’ ‘all costs,’ and ‘100 percent’ are part of election copywriting.”