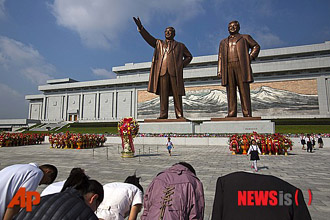 A joint venture between North Korea and Switzerland has been operating the North's first 24-hour pharmacy in the capital city of Pyongyang since last year, the company's Web site showed Monday.

Pyongsu Pharmaceutical Factory first launched its business in 2004 in partnership with the North's health ministry and has since opened nine drug stores in the showy capital to provide North Korean people with essential medicine, such as aspirin and digestive aids.

In August 2012, Pyongsu opened a 24-hour pharmacy "Taedongmun Pharmacy," on the first floor of a luxury apartment building near the Mansudae area, where statues of North Korea's founder Kim Il-sung and his son Kim Jong-il are located, the Web site said.

It is the first pharmacy to be open around the clock in Pyongyang, it said.

Pyongsu is the first North Korean pharmaceutical factory to meet international quality standards set by the World Health Organization for essential drugs distributed in the communist country, it said.