Hawke, Delpy back 9 years later in ‘Before Midnight’

Hawke, Delpy back 9 years later in ‘Before Midnight’ 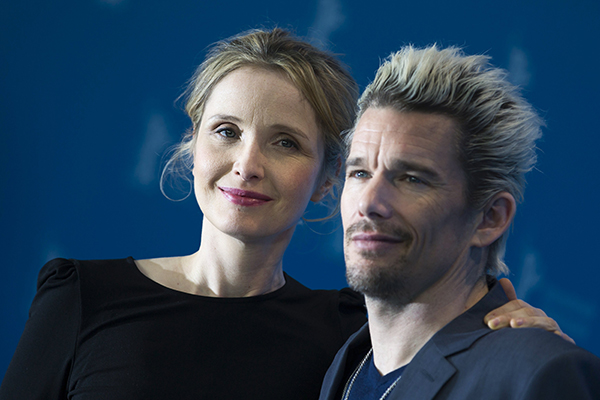 Cast members Julie Delpy, left, and Ethan Hawke pose during a photo-call to promote their movie “Before Midnight” at the 63rd Berlinale International Film Festival in Berlin on Monday. [REUTERS/NEWSIS]

BERLIN - Ethan Hawke and Julie Delpy reprise the roles of Jesse and Celine in “Before Midnight,” the third but not necessarily the last movie in their long-running series based on the same characters as they age over time.

In this film, set 18 years after “Before Sunrise,” the couple is on holiday in Greece and we learn that they live with their twin daughters in Paris while Jesse’s son has stayed with his mother in Chicago.

Screening at the Berlin film festival on Monday, “Before Midnight” examines how life’s twists have taken their toll on the American tourist and French student who met on a train bound for Vienna in 1995 and again in Paris nine years later in “Before Sunset.”

They still love each other but this time they are older, heavier, and bicker more, and the forces pulling Jesse back towards his teenage son and Celine’s determination to pursue her career in France test that bond to its limits.

Director Richard Linklater, on board throughout the series, underlined the organic nature of the “Before .?.?.” films when he was asked whether there might be a fourth installment, presumably sometime around 2022.

“The fact that we’ve made two sequels, I guess it begs the question, but I think I speak for the group here, I’m sure we have absolutely no idea what that (sequel) could possibly be,” he told reporters at the 11-day film festival.

“We probably won’t for another six years. Who knows the future?”

French actress Delpy joked that the final film in the series would be a remake of Michael Haneke’s Oscar-nominated drama “Amour.”

The film is about an elderly couple aged in their 80s facing the inevitability of imminent death.

Critical reaction to “Before Midnight” has been mixed.

In its review, the Guardian newspaper said the movie felt forced, but The Hollywood Reporter wrote: “Though this stage is harder to watch, audiences who have aged along with Celine and Jesse will treasure this new episode.”

Hawke said he, Delpy and Linklater, who jointly developed the script over two years, felt the weight of expectation as they embarked on the third part of a story which many viewers identified with so closely.

“I haven’t met a director in the last nine years that didn’t tell me what he or she thought the third film should be. So we knew we were up against a lot of people having an agenda about where Jesse and Celine should be. That agenda is stifling.”