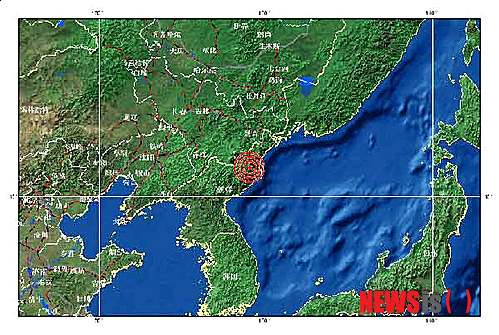 The earthquake-monitoring agency detected a tremor with a 5.0 magnitude at 11:57 a.m. and the epicenter is Kilju County, North Hamgyong, where one of the regime’s nuclear testing facility is located.

The administration has not confirmed whether the tremor was caused by an atomic detonation or a natural quake. The exact cause of the quake will be confirmed through analysis of radioactive substances in the air, it said.

The strength of the seismic activity was eight times stronger than of the second nuclear test in 2009, which recorded a 4.5 magnitude shock, the weather agency said.

The Ministry of National Defense said they assumed it was caused by a 10-kiloton nuclear explosion.

The South Korean government said the epicenter was near the nuclear test site in Punggye-ri, Kilju County, and they are investigating it further.

The Korea-U.S. joint military raised its alert to the higher level.

Some analysts speculated that the timing was related to U.S. President Barack Obama’s state-of-the-union speech, which is scheduled for Tuesday evening Washington time.