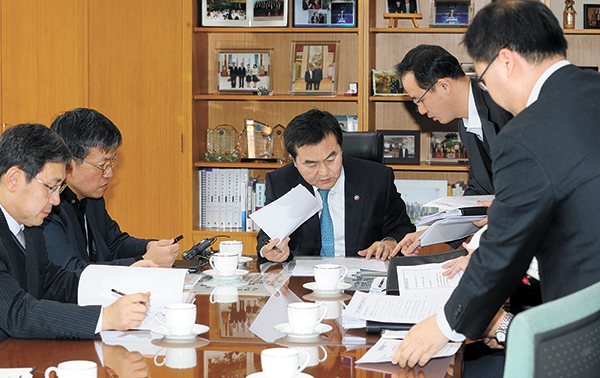 During the day, the Kospi slipped slightly by 0.08 percent to 1,949.39 at 12:10 p.m. after news reports that the South Korean government detected man-made seismic activity in North Korea’s North Hamgyong Province at 11:58 a.m.

Analysts said investors have developed an immunity over North Korean risks after a succession of its provocations, attacks and such major events as death of North Korean leader Kim Jong-il in December 2011.

“The level of the fall of the Kospi is different based on the critical level of news related to North Korean risks, but based on past North Korean provocations, these North Korea-originated risks have negatively affected the stock market for just a short period of time,” said Kwak Jung-bo, an analyst at Samsung Securities. “In the mid-term, North Korean risks have provided a momentum for investors to buy on dips. But we still need to monitor foreign investors’ buying and selling of [South Korean] stocks and won-dollar exchange rate in relation to geographical risks posed by the regime.”

When the regime performed a second nuclear test on May 25, 2009, the Kospi plummeted as much as 6.31 percent during trading hours but it recovered to 1,400.90, down 0.2 percent from the previous day. In the three months after that test, the Kospi jumped by 20 percent and reached the 1,600-something level.

When the death of Kim Jong-il was announced in December 2011, the Kospi shed 4.86 percent during trading hours but finished at 1,776.93, down 3.43 percent. The Kospi subsequently gained 10 percent and reached the 1,915 level just a month after Kim’s death, market observers said.

When North Korea fired artillery shells at South Korea’s Yeonpyeong Island on Nov. 23, 2010, the Kospi managed to rebound just three days after the attack and it jumped by 8 percent a month later.

“The impact will be limited on the financial market as the North’s third nuclear test has already been anticipated by news reports,” said Lee Seung-woo, an analyst at KDB Daewoo Securities. “Given that geographical risks posed by North Korea have never stalled the Kospi’s growth for a long time in the past, this impact will be small, too.”

South Korea’s Ministry of Strategy and Finance echoed analysts’ outlook. It said the impact on the real economy and the country’s credit rating will be limited as investors have gotten accustomed to provocations by the communist regime.

In an emergency meeting presided over by Finance Minister Bahk Jae-wan yesterday afternoon, the ministry said it will establish a joint countermeasure task force led by First Vice Finance Minister Shin Je-yoon. The task force will be in charge of monitoring international finances, domestic finances, exports, raw materials, daily necessities and currency markets to quickly react to the possible spread of concerns in foreign exchange and stock markets. The Bank of Korea, the Financial Services Commission and the Financial Supervisory Service had their own separate meetings yesterday.