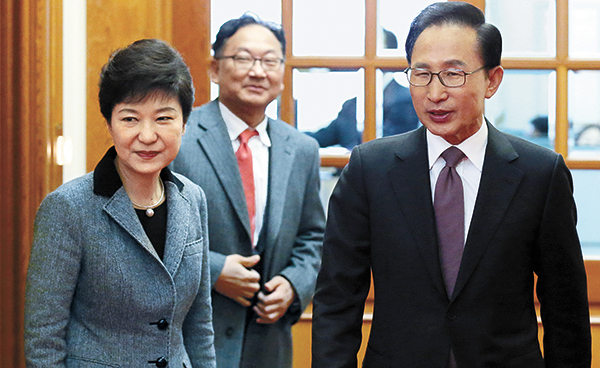 “Despite strong warnings given by us and the international society, [I express] strong condemnation that North Korea pushed forward its third nuclear test,” President-elect Park said in a statement read out by her spokeswoman Cho Yoon-sun yesterday.

“The North’s nuclear test poses a significant threat to the Korean Peninsula and also international peace and impedes trust-building between South and North Korea,” she said. “It also makes it more difficult to [carry out] efforts for peace.”

The incoming president urged Pyongyang to “abide by all UN Security Council resolutions and keep the promise it made to the international society to denuclearize itself.”

The statement came after an emergency meeting was convened by Park and 10 others including Kim Jang-soo, the nominee to lead the newly-created national security department in the presidential office, Yun Byung-se, head of the presidential transition team’s foreign, defense and unification affairs subcommittee, and Yoo Il-ho, chief of staff of President-elect Park. The meeting was held for around 50 minutes, according to Park’s spokeswoman.

The meeting came after North Korea’s state media confirmed yesterday it successfully carried out a third nuclear test, which is in violation of United Nations Security Council resolutions.

As part of her basic policies on the North, President-elect Park has put emphasis on a process of trust-building on the peninsula to restore the inter-Korean relationship. In a softer approach than outgoing President Lee Myung-bak’s, she has also said she is willing to meet North Korea’s young leader Kim Jong-un if doing so would improve bilateral ties. After the nuclear test, Park’s room for maneuvering with North Korea is expected to narrow.

“In no case will the new administration tolerate North Korea’s nuclear arms,” Park said. “The North should realize it has nothing to gain from its provocation.”

In the afternoon, Park met with outgoing President Lee Myung-bak at the Blue House and discussed an earlier National Security Council meeting presided over by Lee.

“North Korea carrying out a provocative move at a time when [South Korea] is expecting an administration transfer can be seen as [a move] to make the people anxious and confused,” Park told Lee. “At such a time, we should work together in a thoroughly consistent manner regardless of different factions and not give room [to the North].”

Lee said, “The people feel assured when it comes to security matters because the president-elect is [dealing with those matters with commitment].”

After the Lee-Park meeting, which went on for about 20 minutes, the South Korean government released an official statement condemning North Korea’s test, describing the move as an “unacceptable threat.”

“Despite UNSC and international society’s continuous warnings, it has been confirmed that North Korea conducted its third nuclear test on Feb. 12, 2013, at 11:57 a.m. in the Punggye-ri area in North Hamgyong Province,” said Chun Yung-woo, senior presidential secretary. “Conducting a nuclear test following a long-range missile launch is a clear violation of UNSC Resolutions [1718, 1874 and 2087] and it poses an unacceptable threat to peace in the Korean Peninsula and Northeast Asia and is a challenge against international society.”

Chun also said South Korea will prepare missiles that can strike all of North Korea at an early date to secure the safety and lives of the South Korean people from the North’s nuclear and missile threats.

U.S. President Barack Obama also released a statement yesterday saying, “The U.S. remains vigilant in the face of North Korean provocations and steadfast in our defense commitments to allies in the region.”

The North’s nuclear test came on the eve of the Obama’s State of the Union speech.

South Korean ruling and opposition parties as well as civic groups, including the Peoples’ Solidarity for Participatory Democracy and the Citizens’ Coalition for Economic Justice, condemned the North’s move.

“Hwang Woo-yea [head of the ruling Saenuri Party] spoke with Moon Hee-sang, the interim leader of the Democratic United Party,” said Lee Sang-il, spokesman of the ruling party. “The two condemned North Korea’s third nuclear test and expressed the need for a bipartisan handling [of the North].”

The United Nations Security Council was to hold an emergency meeting at 11 p.m. yesterday, Seoul time, to discuss the test. Currently, Seoul’s Foreign Minister Kim Sung-hwan is in New York.

According to Cho Tai-young, spokesman at Seoul’s Ministry of Foreign Affairs and Trade, Kim spoke with U.S. Secretary of State John Kerry and agreed to take “swift and unified” measures at the UNSC. Lim Sung-nam, Seoul’s chief nuclear envoy, also spoke with his U.S. and Japanese counterparts and discussed measures.

Lim met with the ambassadors of Japan, the U.S., Russia and the deputy ambassador of China.

The Chinese government released an official statement yesterday making clear its position that there should be “maintenance of peace and stability in the Northeast Asian region, denuclearization on the Korean Peninsula and prevention of proliferation.”

“We firmly oppose the North’s nuclear test,” the Chinese Ministry of Foreign Affairs said in a statement. “Related countries should deal with the matter calmly and the denuclearization of the Korean Peninsula should be resolved in the context of the six-party talks framework.”