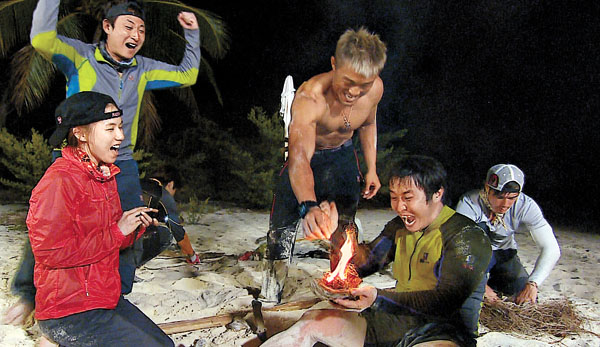 “Law of the Jungles” promoted itself as a reality-based survival program, but came under fire after a guest’s agency director posted comments casting doubt about the credibility of the show. Provided by SBS, [NEWSIS]

So-called nonscripted reality shows have taken over the broadcasting industry, appealing to viewers who like watching well-known celebrities in spontaneous moments. Host members and guests have stepped outside of the studio and thrown themselves into the Amazon or into physically-straining sports events.

But the authenticity of those reality shows has come under scrutiny after the agency director of a celebrity guest hinted that the reality-based survival show “Law of the Jungles” was staged. The show bills itself as unscripted, letting guests go on adventures into wilderness areas.

The controversy flared when Park Bo-young’s agency director Kim Sang-yoo, who went along with her to New Zealand, posted some negative comments about the show on his personal Facebook account earlier this month. He blamed the program for breaching its premise of being a reality show, causing the public to cast doubt over the show’s credibility.

“This program is a damn joke. They force you to eat things, they capture animals and let them loose on the set and they try to film the reactions off of that. They just pick a country they want to leisurely travel to and drink about $1,000 worth of beer in a hotel all night,” he said. 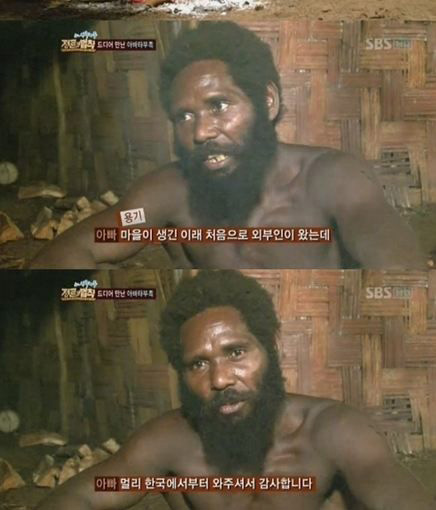 On the left, a screen capture from the SBS “Law of the Jungles” episode where an indigenous man says no outsiders have visited his tribe’s area until the program guests arrived. But the picture on the right, posted on an Internet forum, allegedly shows the man with other tourists before the show was filmed.

After his scathing posts became publicized, Kim apologized by saying that “I’m sorry to cause any misunderstandings. It seemed like Bo-young was having such a hard time that I felt so sad and sorry. After filming all night, I felt a lot of resentment so I acted poorly.”

“Mr. Kim posted his personal feelings under the influence but what he said is not true,” and “The team had to move to a hotel due to a sudden storm and they decided to drink beer to raise the team’s morale. This is a completely plausible thing that could happen during filming and moving around,” SBS, the broadcasting company of “Law of the Jungles,” said in a statement.

Actress Park Bo-young also joined the efforts to diffuse the controversy by defending the program.

“Even though I knew filming in New Zealand wouldn’t be easy, it was harder than I thought. So I think my small complaints became misinterpreted,” she said at the Incheon International Airport on her way back from New Zealand.

Despite all the efforts, further speculation only stoked the dispute over the show’s credibility.

One anonymous netizen posted an indigenous man posing with different groups of tourists. But the native man said in “Law of the Jungles” that the guests of the program were the first outsiders to visit their village.

After the posts went viral, a producer of the program issued a statement to explain the position.

“The recent controversy might hurt the emotions of viewers that love our program. We should’ve explained in more detail, but we admit that some scenes are exaggerated a bit. This is caused by our staff member’s desire to bring out more interesting episodes,” said Yoo Yoon-jae, a producer for the show.

“Law of the Jungles” is not alone in being subject to the scrutiny.

MBC’s “We Got Married” also came under fire. The show pairs up celebrities and young idol stars to show what life would be like if they were married. The show is also believed to be largely unscripted, drawing in ratings with make-believe couples’ lovey-dovey affection toward one another that looks almost real.

But the show came under fire after reports that Oh Yeon-seo, who appears on the show as a “wife,” was dating someone who wasn’t on the show. Paparazzi pictures of Oh and her co-star Lee Jang-woo from another drama showed them embracing.

Fans - especially those of her partner Lee Joon - were outraged that Oh was putting on an act, pretending to be single and deciding to appear in the mock marriage program where supposedly “single” celebrities are paired up.

The show finally decided to exclude the couple.