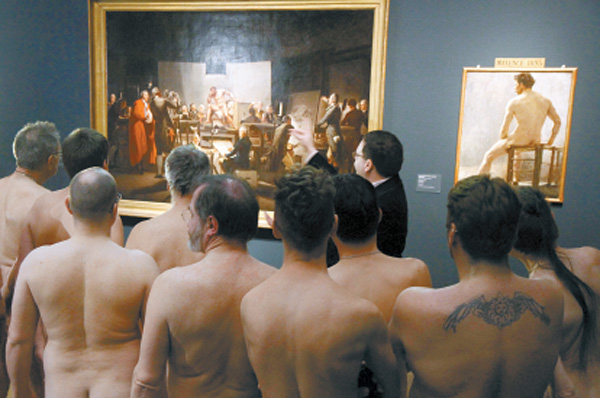 Nude visitors take in artworks at the exhibition “Nude Men from 1800 to Today” at the Leopold Museum in Vienna, Austria on Monday. Nudists and naturalists have been inspired by the title of the show. [AP/NEWSIS]

The exhibit in Vienna’s Leopold Museum is entitled “Naked Men,” so a group of nudists and naturalists took the curators at their word and showed up to see it on Monday in the buff.

“It is good to be free, I am seeing this exhibition for the second time now and it is perfect to see ‘Naked Men’ as a naked man,” said a visitor who called himself Max and who on his previous visit wore his clothes.

The exhibition, which has been extended until March 4, is designed to show the diverse and changing depictions of male nudity in art history.

Among its exhibits is a grotesque self-portrait by Egon Schiele and a photograph by French artists Pierre & Gilles called “Vive La France” of three men of different races wearing nothing but blue, white and red socks and soccer boots.

Outrage from parents and religious groups in October forced the Leopold to cover up the private parts of the three nude male soccer players used on large publicity posters around Vienna.

But “Naked Men” helped boost visitor numbers at the museum by 17 percent to more than 364,000 last year.

The museum - named for Austrian collector Rudolf Leopold - was inspired to invite the public to get naked to see the exhibition after an inquiry from a group of German nudists.

Around 250 viewers of various ages and nationalities attended the special showing.

“It is a great story to tell my friends,” said Luc, a student from France who, like most people interviewed, declined to give his surname or to be photographed.

“This is my first time doing this naked, I thought it is time to make some nonsense.”

However, not everyone thought it was all that special.

“I don’t understand what the big fuss is about,” said Moritz, from Germany. “Everyone has seen real naked men before.”