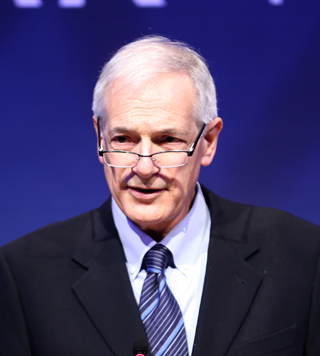 The policies on North Korea pursued by the United States over the past two decades have failed to reduce the threat Pyongyang poses in Northeast Asia, said Robert Gallucci, president of the John and Catherine MacArthur Foundation, yesterday.

“I think, however, one characterizes the policy we [Washington] have pursued over the last 20 years - engagement, containment, whatever - it has failed to reduce the threat posed by North Korea to the security of the region,” said Gallucci, an academic and former diplomat, in a keynote speech at the two-day Asan Nuclear Forum held at the Grand Hyatt Hotel in central Seoul.

The annual forum is hosted by the Seoul-based Asan Institute for Policy Studies and attended by some 200 nuclear scientists and academics, engineers and policy analysts from around the world to discuss global nuclear challenges, including the aftermath of North Korea’s third nuclear test conducted last week.

“Let us remember that 20 years ago North Korea had accumulated only a small amount of plutonium, had no uranium enrichment program and had neither tested nor built any nuclear weapons,” Gallucci, 67, said, adding that the North’s most sophisticated ballistic missile 20 years ago was the medium-range Rodong.

When North Korea first tried to withdraw from the Nuclear Nonproliferation Treaty in 1993, Gallucci was serving as the U.S. assistant secretary of state for political-military affairs and was engaged in discussions with North Korea, which eventually led to the agreement of the Geneva Framework in 1994. He was the chief negotiator for Washington.

Gallucci pointed out that the U.S. has changed its presidents three times since the beginning of talks to address the first North Korean nuclear crisis in 1993, and North Korea has changed leaders twice. Twenty years ago, the International Atomic Energy Agency found North Korea violating its safeguards commitments and in response, the United Nations Security Council took action. The North then announced it would withdraw from the NPT.

“A fair estimate would be that North Korea has accumulated 20 to 40 kilograms [88 pounds] of plutonium, enough for up to eight nuclear weapons, conducted three nuclear explosive tests, is increasing its fissile material stocks daily with a modern gas centrifuge enrichment program, and is headed for a robust nuclear weapons program mated to a ballistic missile capability of intermediate and eventually intercontinental range,” Gallucci said.

In a press conference after his speech, Gallucci told reporters that diplomatic engagement is probably the best way forward with the North.

“It [diplomatic engagement] would be a good idea, and I would favor looking for an opportunity to engage the North Koreans in order to determine whether or not they are prepared to enter into a protracted discussion that would meet some of their security concerns and meet our concerns of their nuclear weapons program,” he said.

At the forum, Chung Mong-joon, honorary chairman of the Asan Institute for Policy Studies and also a senior ruling Saenuri Party lawmaker, said there should be a new perception of how to deal with North Korea, and all countermeasures against the North should be considered, including bringing back U.S. tactical nuclear weapons that were pulled out of South Korea in 1991.

“Tactical nuclear weapons would be from the U.S.,” Chung said, “so even if we redeploy them in South Korea, we wouldn’t be violating the NPT.”

Since the North’s third nuclear test last week, Chung and other ruling party lawmakers have been saying South Korea should have its own nuclear deterrence.

Gallucci, however, rejected the idea of reintroducing American nuclear weapons to the Korean Peninsula.

“I don’t think there is a hole in the nuclear umbrella,” he said. “Our commitment under the U.S. treaty and alliance commits us to defend South Korea and act to deter any country from threatening South Korea with nuke weapons.”