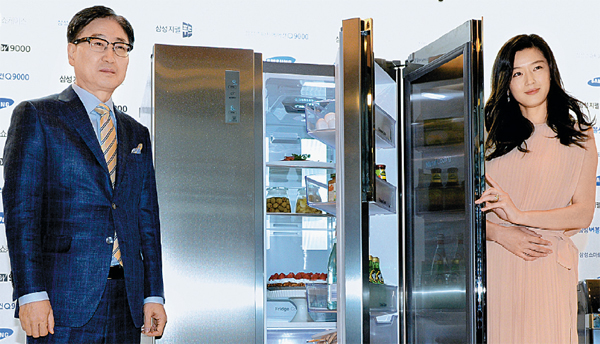 Samsung Electronics yesterday unveiled premium refrigerators, air conditioners and washing machines armed with never-before-seen ideas that the world’s top smartphone and television maker hopes will help propel it to the No. 1 spot in consumer electronics within two years.

“Our new home appliance products overturn all the existing ideas - the results of relentless analyzing of user lifestyles,” said Yoon Boo-keun, president of Samsung Electronics’ consumer electronics, at a media day yesterday at the Seocho headquarters in southern Seoul. “They are some of the products that will help us achieve the goal of becoming top producer of consumer electronics gadgets by 2015.”

The announcement comes two days after Samsung’s domestic rival, LG Electronics, announced the same goal with home appliances. Samsung last year was the world’s top refrigerator producer, trouncing longtime No. 1 Whirlpool, on the back of its premium T9000.

Asked about the prospect of Samsung products being dealt a blow by the global economic downturn, he said, “The gap between companies doing well and those that are not widens when the economic situation worsens. We have set up the strategy to expand the gap by consistently discovering the consumer needs and developing products to please consumers.”

The new products introduced yesterday include the Zifel Food Showcase refrigerator model FS9000, which has two separate food storage spaces - an unprecedented setup. In the exterior layer dubbed “show case,” the user can keep frequently eaten food, while the inner layer dubbed “in case” accommodates bulky food that has low frequency of usage. The two sections have different doors. The refrigerator also has six drawers inside the show case zone. A drawer for kids is located at eye level. The retail price ranges between 3.77 million won ($3,103) and 4.47 million won, depending on capacities of 834 liters to 856 liters.

For the new air conditioner model-named Smart Aircon Q9000, Samsung has implemented so-called “aerodynamics” technology used in jet engines to enhance cooling. The model also has reduced the length and width of the floor area by 57 percent compared to its predecessor. The retail price is 1.8 million won to 2.35 million won, for eight different types.

The Bubble Shot 3 W9000 drum washing machine, with a capacity of 21 kilograms (46 pounds), weighs the laundry and automatically injects the optimal amount of detergent and fabric conditioner - a new function for domestic washing machines.

The retail price is between 2.5 million won and 5.2 million won, depending on model.