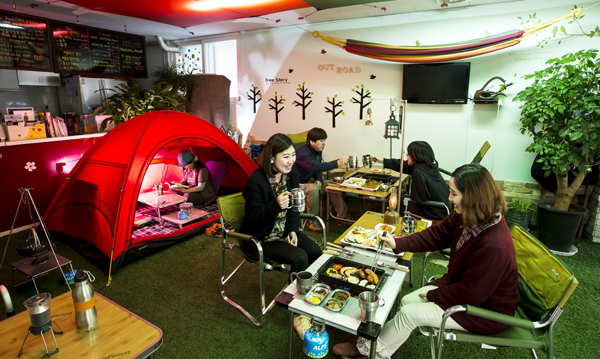 Visitors enjoy “camping” with barbecue and beer at the camping cafe “Out-Road” in Bukgajwa-dong, central Seoul. The cafe is equipped with camping equipment, including double Alpine tents. [JoongAng Ilbo]

Enjoying coffee in a cozy tent while it snows outside and talking the night away with grilled barbecued meat and cold beer in a steel mug is a tempting experience for anyone cooped up for most of the winter.

Well, all this can be a reality at so-called “camping cafes.”

These cafes began springing up downtown about two years ago.

Here, you can fulfill some of your fantasies of winter-time camping, but you don’t have to actually spend any time outside.

A camping cafe is a restaurant whose main menu is barbecue and is decorated with equipment like camping spoons, knives and tents. Basically, the cafe tries its best to recreate the atmosphere of camping.

The best part of these cafes is that you don’t have to own any of the camping equipment to enjoy the “camping.” Plus, most of these cafes are indoors, so you’re not exposed to the elements at all.

Also, camping cafes can be used at cheaper prices than camping zones at five-star hotels. Hotels like the Shilla Jeju began offering such zones since 2010, as Koreans became interested in camping. The price of a barbecue set for four people ranges from 30,000 won ($27) to 70,000. Here are five recommended camping cafes in Seoul and the nearby Gyeonggi region. 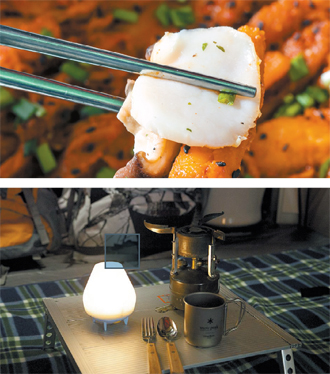 Out-Road differentiates itself from other camping cafes that are only equipped with a few pieces of camping equipment. Cafe owner Shin Eon-mi and Kim Jae-hwan are experts in camping and hiking. And the food they offer shows that.

Besides conventional barbecue (33,000 won) offered at other camping cafes, Out-Road also offers a string of dishes that people cook in outdoor camping without much hassle and expensive resources.

They include: sea snail sashimi in chilled broth with sweet and sour seasoning (12,000 won) and roasted deodeok (a mountain herb root similar to ginseng) in sweet and spicy seasoning with roasted shiitake mushroom and clams (33,000 won). These recipes were, in fact, invented by Shin, who is known as a good cook.

In addition, the cafe also runs the Camping Experience Program to pass on proper camping culture. Those that sign up with the program practically have the access to all parts of the facilities for five hours, allowing them to learn camping know-how from the owners and enjoy food that they bring.

It costs 120,000 won on weekdays and 200,000 won on weekends. The owners go on actual camping trips with members of the cafe’s internet community (cafe.naver.com/cafeoutroad) every month. People that have no camping equipment have nothing to worry about, as the cafe offers equipment for free. Hours are from 1 p.m. to 1 a.m, and it closes every Sunday. 02-3297-3772.

Outdoor Kitchen is a famous restaurant near the Cheonggye Stream, and is nicknamed a “barbeque pub.” It operates within a large tent near the stream, which creates quite an atmosphere for camping. The cafe’s menu offers various meat dishes, including smoked pork belly (18,000 won), smoked chicken (18,000 won) and grilled lamb skewers (10,000 won). Instant ramyeon boiled with beef ribs (5,000 won) is a favorite. The cafe also runs a camping shop, selling equipment like oak firewood, sausage and other camping necessities. Hours are from 6 p.m. to 2 a.m, and it closes every Sunday. Outdoorkitchen.co.kr, 02-2233-4309. 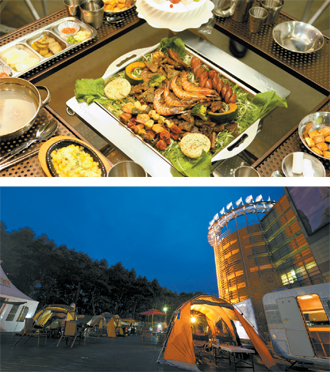 In the middle of a cluster of high-rise skyscrapers, Jungle BBQ stands out as a restaurant made from a tent without a traditional building. Yangjae Citizen’s Forest adds to the natural atmosphere. People can feel as if they are in a suburban outdoor camping ground. When you reserve a tent for four people, you are also served a standard set with pork belly, shoulder loin and vegetables. Instant ramyeon boiled in a portable pot costs 5,000 won, while a barbecue set for four people costs 70,000 won. Hours are from 6 p.m. to 11 p.m. Reservation by phone is a must. Jungle-bbq.co.kr, 02-2155-1397.

Located in the middle of the downtown Sinchon area, Four Season Camper features a cozy atmosphere. Although it is on the first basement floor, the duplex cafe offers a refreshing atmosphere with a high ceiling and even tall trees. Many people enjoy private time in snug tents (good for four) or rest in the open space where they can just sit on the floor. A barbecue set costs from 33,000 won to 69,000 won depending on the amount. The set comes with grilled pork ribs, sausages, shrimp, corn and chicken wings. A traditional-style lunch box wrapped in a cloth is also popular. The lunch box with shrimp fried rice costs 5,000 won. Hours are from 5 p.m. to 12 a.m and it is closed on the second and fourth Sunday. blog.naver.com/4s_camper 02-322-1441.