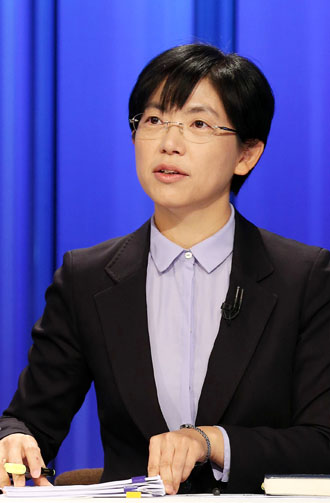 The Unified Progressive Party, struggling in the wake of a vote-rigging scandal that split and diminished it, elected a former presidential candidate as its new chairwoman on Saturday.

Lee Jung-hee, a former co-leader and the UPP candidate in the December presidential election, became the new chairwoman of the nation’s fourth-largest party, which controls six parliamentary seats after its bitter split.

Ninety-one percent of 9,768 delegates voted for Lee, who was the sole candidate in the chairmanship election.

“I will gather my strength to build a strong foundation of consolidation [of party members] while planting myself deeply among the people,” Lee said in an address after the vote. “Changing ourselves humbly, mustering up the courage within you, I will make our way forward.”

It’s been nine months since Lee stepped down from the post taking responsibility for allegations that some hardcore members manipulated a March 2012 primary before the April general election. The other three co-chairmen also resigned at the time.

At least 19,200 members have defected from the party because of the claims that the primary was rigged in favor of the largest faction, the so-called Gyeonggi Dongbu Alliance, who were pro-Pyongyang student activists in the 1970s and ’80s.

Chairwoman Lee insists the primary wasn’t rigged and the UPP’s travails were but factional fighting.

“Some say it is not right to elect Lee as the leader because of her defeat in the December presidential election,” Lee Sang-kyu, a UPP lawmaker, said. “Still, we think the blame put on Lee reflects public opinion that Lee was the only alternative to President Park Geun-hye.”

The UPP also elected five supreme council members, most from its largest faction.

Following its split, the UPP doesn’t expect an alliance with the Democratic United Party, the largest opposition party.