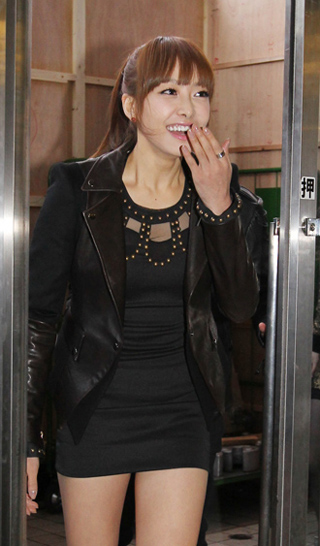 Rumors about a relationship between f(x) member Victoria and TVXO’s Changmin began swirling online after a Weibo post on Sunday, though they were quickly denied.

Victoria uploaded a photo of some food she made with the caption “Happy Lantern Festival! Even though this is not the food we eat during this day, I made some meat soup and fried radish.”

It was not the food but the spoon that caught fans’ attention though as it showed a man’s reflection.

Some netizens claimed the mysterious figure was Changmin —a suspicion confirmed by SM Entertainment on Monday.

But the agency said the two were not on a date. “Besides Changmin, there were some other staff present and Victoria likes cooking so she treated them,” it said.

Victoria won the best rookie actor prize in her native China last year for her role in the drama “When Love Walked In”. TVXQ successfully held a concert titled “Catch Me” at the Asia World Arena last month, drawing a crowd of 10,000.