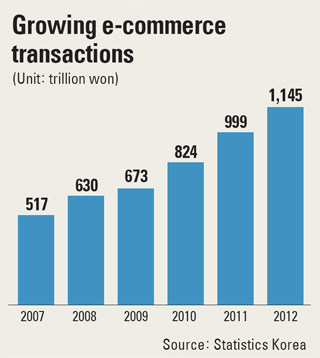 Korea’s e-commerce sales jumped to an all-time high of more than $1 trillion in 2012, led by a surge in business-to-business transactions, the government reported yesterday.

The total was the largest since the government began compiling data in 2001.

Cyberspace transactions increased across the board, with sales between businesses leading the way.

Meanwhile, cyber shopping sales involving B2C and C2C transactions increased 11.3 percent year-on-year to 32.35 trillion won, according to the report. Cyber shopping accounted for about 10 percent of the country’s total retail sales last year. The growth of cyber shopping partly stemmed from the increasing use of smartphones, tablet PCs and other mobile devices, according to the Korea Online Shopping Association (Kolsa).

The spread of smart devices has created a new sector dubbed “mobile shopping,” which the association estimates will grow to a 1.3 trillion won market by the end of the year. In accordance with the change in people’s lifestyles and the proliferation of mobile devices, brick-and-mortar retailers are expanding their sales channels by launching mobile shopping services.

According to Kolsa, the growing population of singles is also a key factor in the expansion of cyber shopping.

“One-person households prefer buying a small number of items whenever they need via mobile devices,” said an official at the association.

Travel packages were the most popular item online, accounting for 32.3 percent of the total cyber shopping transactions last year. Food and beverages followed with a 22.8 percent share. Other non-food items, including automobile accessories, represented 17.1 percent of sales and home appliances, including electronics and telecommunications devices, at 10 percent, according to the government agency.