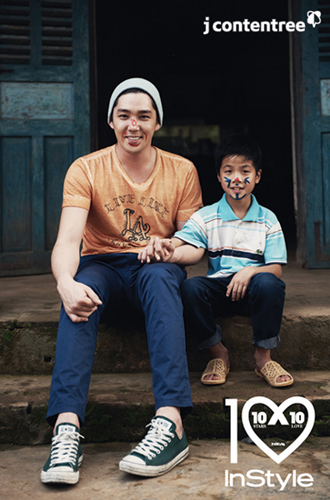 Super Junior’s Kangin had a makeover, both inside and out. The idol group member has shed all the weight gained during his two-year military service and has taken on a charity project as he steps back into the limelight.

As one of 10 entertainers chosen to carry out a good deed to mark Korean In Style magazine’s 10th birthday, Kangin opted to spend time with children who receive support from Good Neighbors, a Korean charity.

While visiting a rural village in Vietnam, the Super Junior member gave art lessons while kicking around a football with the kids.

“I hope that I won’t be ‘some foreigner’ to the kids,” said the singer.

The full story and accompanying pictures will be published in the “Love Actually” spread contained in the March edition of In Style.

Kangin was one of the most popular members of his boy band until he beat up a man while drunk in 2009. Following the incident, he stayed out of the spotlight until July.