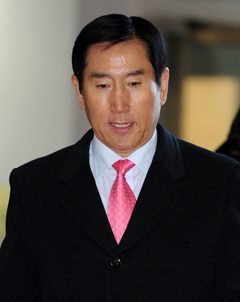 In an unusual move, a Seoul court on Thursday granted bail to Cho Hyun-oh, the former top police official who was imprisoned on charges of defaming the late President Roh Moo-hyun, just eight days after he was unexpectedly sent to jail on Feb. 20.

In accepting the bail request of the 58-year-old former commissioner of the National Police Agency, the court pointed to how a change in Cho’s defense position had not been taken into account in his first trial, in which he was sentenced to 10 months in prison.

“Cho changed his position during the trial from alleging that he was not guilty as he had only told the truth [about President Roh], to saying that he had believed the claims [of sources] even if they were groundless rumors,” said Judge Jang Sung-gwan.

After he was jailed, Cho said that he was willing to have his sources testify in order to prove his innocence, an offer the judge said he also took into consideration in granting bail. Cho had previously refused to reveal the identities of his sources.

The Seoul Central District Court decision came on the condition that Cho not leave the country without court permission and that he put down a 70 million won ($64,640) deposit.

The former commissioner’s troubles stemmed from remarks made about the liberal president during a speech to fellow police officials in March 2010, during his tenure as chief of the Seoul Metropolitan Police Agency.

“Former President Roh jumped off a cliff because a large slush fund was found in bank accounts that were opened under borrowed names a day before he killed himself.”

Cho has said in his defense that he had been told by reliable sources with connections to the investigation into Roh’s finances that the former president did have secret funds in false name bank accounts.