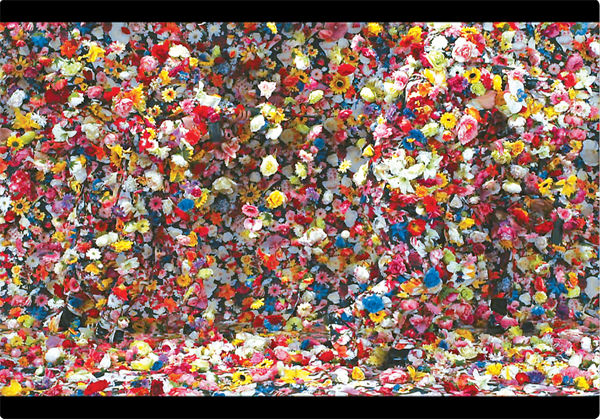 A large-scale exhibition of Asian media art, co-curated by Koreans and Germans, is ongoing at the ZKM media museum in Karlsruhe, Germany, until Aug. 4.

The exhibition, titled “Move on Asia. Video Art in Asia 2002 to 2012,” features 140 pieces of video art by artists from 13 Asian countries, including China, India, Japan and the Philippines.

Among the Korean artists featured, Lee Yong-baek is presenting a 23-minute video called “Angel Soldiers.” It shows a space filled with beautiful flowers of various colors, but viewers will soon feel uneasy as some parts of the blossoms move slightly. A closer look reveals a group of camouflaged soldiers buried among the flowers.

And Jeong Yeon-doo presents “Six Points.” In the 29-minute video, many photos of New York are seen in a line as if the camera is panning through a street. The moving image is accompanied by narrations made by anonymous people from six areas of the city.

Lee and Jeong represented Korea in the Venice Biannual in 2011 and 2005, respectively. Among other well-known Asian artists participating in the show are Miao Xiaochun of China, Meiro Koizumi of Japan and Tzu Nyen Ho of Singapore.

“Until the turn of the century, video as an art genre was mainly attributed to the Western hemisphere .?.?. Over the last two decades, however, independent video cultures have evolved [and] found a global public,” the museum said on its Web site.