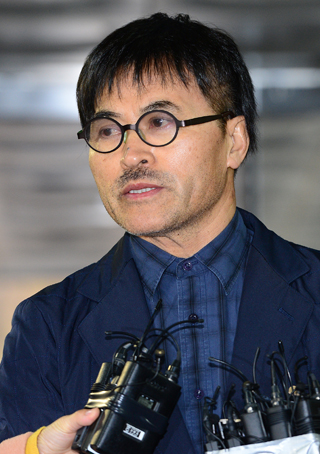 Pak Jun, a well-known hair dresser who runs 159 hair salons under his name, both in and out of the country, has been accused of sexually assaulting four female staff members.

The Seoul Gangnam Police Precinct reported Monday one of Park’s employees, whose identity has been withheld by the authorities, filed a rape charge against Park, claiming her boss raped her several times since last year in his beauty shop in the affluent Cheongdam-dong neighborhood in southern Seoul.

The alleged victim, who worked as Park’s secretary, reportedly told the police she could not turn down Park’s demand for sex because of Park’s status.

Another group of three female staffers also filed complaints against the 62-year-old man, whose real name is Park Nam-sik, alleging the successful businessman sexually harassed them while drunk at a temple in Gyeonggi during a seminar for employees earlier this year.

The police requested a court-ordered arrest warrant upon receiving the accusations Monday.

“We are currently conducting an investigation into the claims and requested the court grant an arrest warrant as it was deemed necessary to detain Park for investigation,” said a police officer, who spoke on condition of anonymity, involved in the case.

Following the police request for the warrant, the entrepreneur appeared at the Seoul Central District Court at around 10:30 a.m. yesterday to attend court questioning.

Standing before the court entrance, the somber-looking Park said he was sorry for the trouble he has caused.

“I will give you the answers once I am done with the questioning,” said Park when asked if he acknowledged the rape charge against him.

On Monday, Park released a statement rebutting the claims raised by the plaintiffs. “I don’t see why they filed sexual assault charges against me,” said the renowned hairdresser.

He continued to say large parts of their accusations were fabricated and false.

Park reportedly said it was consensual sex with his former secretary during court questioning yesterday, according to the JoongAng Ilbo.

The troubled businessman also claimed the nature of the sexual conduct with the other three plaintiffs was not coercive.

“For a celebrity [like Park], just getting implicated in this kind of scandal lands a great blow to one’s image,” said a lawyer representing Park. The lawyer added they are trying to settle the charge with the accusers.