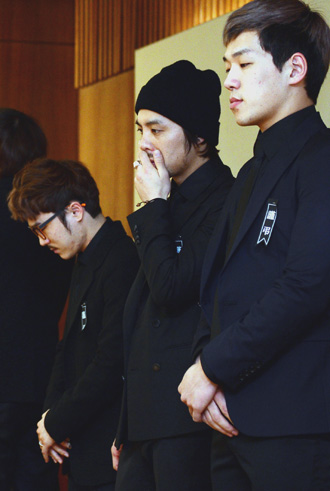 Ulala Session will make a first public appearance later this month since the widely publicized death of its frontman Lim Yoon-taek from cancer last month.

The now quartet chose to perform at “Love Sharing Concert,” a charity musical event to raise funds for children suffering from leukemia, at Busan Exhibition and Convention Center, or Bexco, on March 23.
An industry official said the group decided to perform at the event to honor Lim, who according to local media reports made charitable contributions and put up events for causes.
The group has not scheduled additional appearances following the charity event as it plans to focus on making the next album.
Lim, who as a member of Ulala Session won the third season of singing survival show “Super Star K” in 2011, made public on the show that he had been suffering from stomach cancer. After a year and a half of battling the disease, Lim succumbed to his untimely death last month. He is survived by his wife, whom he married last August, and a 2-month-old baby girl.