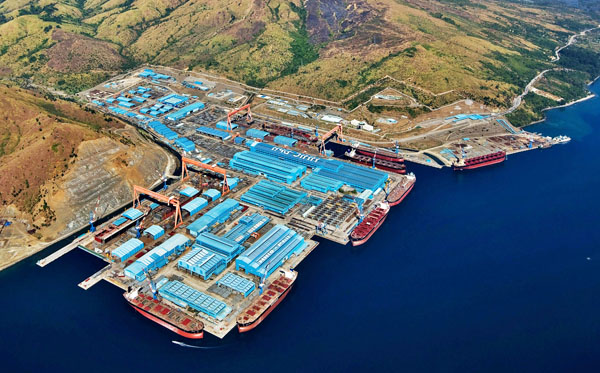 The Subic Shipyard in the Philippines, a subsidiary of Hanjin Heavy Industries, won a contract from Greece-based Technoma to build four 6,800-TEU container ships and another for eight 38,000-CMB LPG vessels from Belgium-based Exmar. Provided by the company

After the corpse protest by members of its labor union last month, Hanjin Heavy Industries said yesterday it won two orders at the company’s shipyards in Busan and the Philippines considered significant to normalization of its operations.

If the contract is completed, Yeongdo Shipyard will get back to work after a five-year-long paralysis.

Yeongdo Shipyard was the country’s first shipyard when it was built in 1937.

However, its docks have been empty for the past five years due to long-running conflicts between labor and management. The trade union struck for 309 days in 2011 after the company forced 400 employees to retire in 2010 in the aftermath of the global financial crisis. About 500 workers were paid leave until recently due to a lack of orders.

In February, members of the union carried the coffin of a worker who committed suicide in December into the Yeongdo Shipyard and began a protest, demanding the company withdraw its lawsuit against the union for 15.8 billion won ($14.4 million) in damages. The company accused the workers of disrupting the shipbuilder’s operations. The company and union recently agreed to an undisclosed amount of compensation.

“Despite difficulties due to the depressed shipbuilding market and labor protests, Hanjin Heavy has been struggling to put the company back on track by rolling out aggressive sales activities,” said a company spokesman. “Yeongdo Shipyard is expected to successfully ink the support vessel deal soon.”