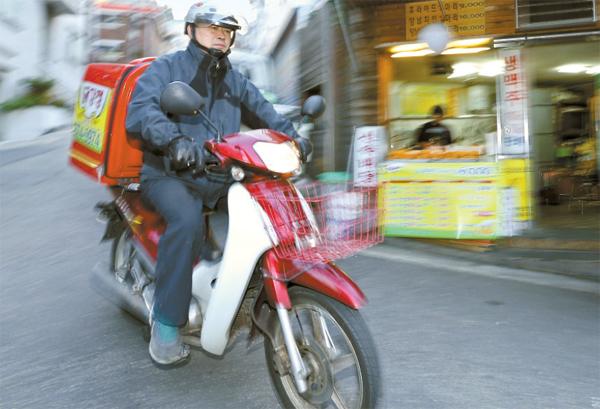 Kim, a baby boomer who retired in the late 1990s, runs his own chicken restaurant and delivery in western Seoul. By Kim Do-hoon

The rising number of self-employed people has been a headache for the Korean economy, but the growth rate of those going solo declined in January for the first time in 18 months, a government report said yesterday.

The wholesale/retail sector saw the number of self-employed drop by 28,000 in January after rising 27,000 in December. At the same time, there were 28,000 less restaurant and accommodation businesses.

Foreclosures of restaurants have been on the increase due to heated competition, the finance ministry pointed out.

“The recent fall stemmed from an overheated competition in some sectors with lower entry barriers that where small merchants choose to be in,” said Seo Jin-ho, an official at the finance ministry. “Competition among small eateries and retailers grew fierce when the number of self-employed people surged last year.”

With the massive retirement wave of baby boomers, who were born between 1955 and 1963, last year, the number of the self-employed surged significantly, resulting in low-quality jobs that ultimately led to household debt and individual bankruptcies.

“In the case of 2012, the overall job market was in bad condition as the low employment rate of twentysomethings showed, but the number of employed people in their 50s and 60s grew. This means those older people found jobs as they opened their own stores or businesses, but it isn’t that helpful to the economy,” said Sohn Min-joong, a researcher at Samsung Economic Research Institute. “Self-employed jobs aren’t considered high-quality jobs, as they are burdened with mounting debt, which eventually leads to foreclosure or bankruptcy.”

The government has been struggling to devise measures to deal with the issue.

“Although self-employed people have a tough time, the government can’t tell them to stop opening new stores because it is part of job creation,” said Seo. “Rather, the government chooses to support them by providing minor benefits.”

The government introduced the country’s first unemployment benefit system for self-employed people in January 2012, and the Ministry of Employment and Labor said the first beneficiary was was approved recently.

If a merchant pays a a monthly premium of 50,000 won ($46) after starting his business, he will be eligible to receiving about 100,000 won a month if the business is forced to close.

The government has been promoting the new system, but only about 1 percent, or 25,000 of those eligible, had enrolled as of last month.

“In the long term, the number of self-employed people is likely to decline along with moves by private companies to raise the retirement to 60 and increasing re-employment of the baby-boomers who were laid off last year,” the government report said.

“What the government can do is to protect the remaining self-employed people with a better safety net,” said Seo. “Preventing oversaturation in the restaurant and retail industry is one goal, while encouraging people to start other types of service businesses is another.”