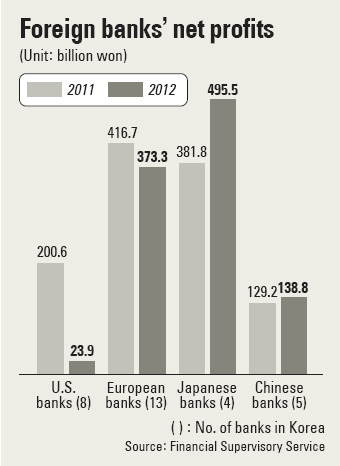 U.S. and European banks operating in Korea suffered heavily last year because of the strengthening won.

“The American and European banks are mostly centered on derivative sales and stock investments,” said a FSS official. “Therefore, they are more likely than other banks to be exposed to the won appreciation.”

The Korean currency has recently been depreciating due largely to increasing geopolitical tensions between the two Koreas. The won closed at 1,090.35 against the dollar yesterday.

Meanwhile, 18 Asian banks saw their net profits increase from a year earlier as their business centered on lending.

The combined net profits of the Asian banks were up 12.5 percent to 690.6 billion won.

Although household borrowing has been slowing on the back of financial authorities’ pressure, last year overall debt grew close to a record 960 trillion won. This year it is expected to easily surpass 1,000 trillion won.

The financial regulator said although the foreign banks racked in a profit of 2.2 trillion won on foreign exchange-related investment thanks to the appreciation of the won, it suffered heavily on derivative investments.

The banks’ return on assets shrunk 0.09 percentage points to 0.44 percent. However, net interest margin, an indication of the bank soundness, was the same as the previous year at 1.96 percent.