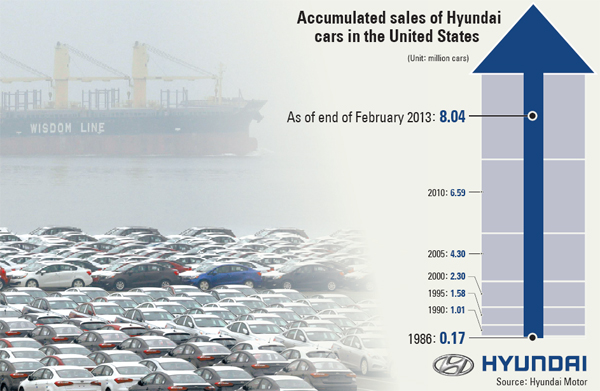 Hyundai and Kia vehicles wait to be shipped to the North American market at a port in Pyeongtaek.[REUTERS]

Hyundai Motor reached a new milestone last month, selling its 8 millionth car in the United States 27 years after it first entered the market.

The landmark comes even as automakers like Toyota and General Motors are aggressively marketing to consumers there.

“Lately, the sales environment in the United States has been quite tough for us,” said a Hyundai official.

“With the weak yen, Japanese automakers like Toyota and Honda have been aggressive market-wise in selling their cars to benefit from the price-competitiveness, while U.S. automakers like General Motors have been reinforcing their corporate structures with government support to expand sales.”

Hyundai Motor, which is Korea’s largest automaker, stepped into the U.S. market in 1986 when it started exporting the Excel.

It only took another six years for the automaker to break the 8 million mark. In February alone, it sold 52,311 cars.

Of those 8 million, more than 6 million have been exported from Korea.

Based on figures provided by the company, the automaker’s best-selling car over the past 27 years in the U.S. is its mid-size Sonata sedan, which was introduced there in 1989.

As of last month, a total of 1.94 million Sonatas have been sold.

In addition to the Sonata, the Avante compact, which is sold under the name Elantra overseas, is also popular.

A total of 1.91 million Avantes have been sold since 1991 when it was first introduced.

But there have been hard times too.

According to the automaker, in Hyundai’s early years in the U.S. market, demand for Excels rose sharply.

But the firm struggled not long after because it lacked infrastructure and sufficient quality control.

It was only after Chung Mong-koo became chairman and began concentrating on quality and an on-site focus that the numbers started to rise again.

The recent economic slowdown due to the financial crisis in 2008 was also a challenge.

Hyundai Motor, however, remained relatively immune to the tough business environment by using unique marketing tactics like the Assurance Program, which allows Hyundai owners to return their vehicles within a one year period if they lose their jobs.

The Korean automaker recently suffered a setback on its brand when the company overstated its fuel economy.

Hyundai Motor has been expanding its ratio of full-size vehicle sales, introducing its Genesis and Equus sedans in 2008 and 2010, respectively, in the U.S. market.

“This year, we plan to expand sales of our large, luxury cars to improve profits and upgrade our brand,” the official said.