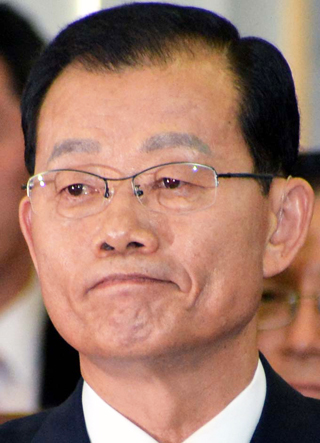 Defense minister nominee Kim Byung-kwan, 64, was grilled yesterday at a confirmation hearing over his consulting job for an arms broker and other ethical lapses, but he denied certain allegations and vowed to strike back against North Korea if it provokes the South.

The former four star general, who had served as the deputy commander of Korea-U.S. Combined Forces Korea in 2006-08, has been under mounting public and media pressure to abandon the nomination because of his well-paid job as a consultant for a local arms broker from 2010-11. The arms broker was involved in a controversial project to import faulty German tank parts for the Korean Army.

Kim apologized for causing public concern over the issue, but defended his work, saying it was limited to consulting for a project to jointly build an engine manufacturing factory with a German firm, which later fell through.

“I have never worked to only gain wealth. I have thought [what I have done] was for the country,” answered Kim. “I am not a lobbyist .?.?. I place all of my integrity on the promise that I will not take any action that will inappropriately favor companies I have connections with.”

Lawmakers also asked about the news reports of Kim’s untimely overseas trip to Japan a day after the North Korean shelling of Yeonpyeong Island and Kim’s insensitive golfing a day after the sinking of the warship Cheonan by torpedo attack from the North on March 26, 2010.

“There was nothing I could do as a civilian at the time,” said Kim. “I apologized for my decision.”

In an opening statement, Kim called attention to high tension on the Korean Peninsula as North Korea stepped up its bellicose statements. The North’s military has also threatened to scrap the Armistice Agreement that halted the 1950-53 Korean War and denounced Seoul and Washington over annual military drills.

“I will establish a strong military and strengthen capability to guard against North Korea’s nuclear weapons and missiles” Kim said in an opening statement. “If the enemy provokes, I will strongly and sternly retaliate so they will pay a high price.”

By law, the president can appoint ministers without the parliament’s approval if the National Assembly fails to hold a hearing within 30 days after the president requests a hearing for a nominee. The request for Kim was submitted on Feb. 15.