North Korea yesterday issued yet another barrage of war threats to the South in a move to ratchet up tensions on the peninsula, with the South making its own stern response.

According to the report, Kim visited the units on Mu and Jangjae islands and ordered the soldiers to be prepared to destroy enemy targets at a moment’s notice.

The troops on Mu Island were responsible for the Yeonpyeong Island shelling in November 2010.

Kim instructed the troops on the specific order of attacks and targets on the South’s five northern most islands, including Yeonpyeong, during the visit, the report said.

The North issued also another statement yesterday and vowed to discard all nonaggression pacts with the South as of Monday.

“The DPRK abrogates all agreements on nonaggressions reached between the North and the South,” said the Committee for the Peaceful Reunification of Korea, a propaganda organ of Pyongyang. The DPRK stands for the North’s official name, the Democratic People’s Republic of Korea.

The North said the measure is in response to the South-U.S. joint military drills. The two countries will begin Monday their annual “Key Resolve” drill, intended for the swift reinforcement of the U.S. troops to the peninsula in case of an emergency. 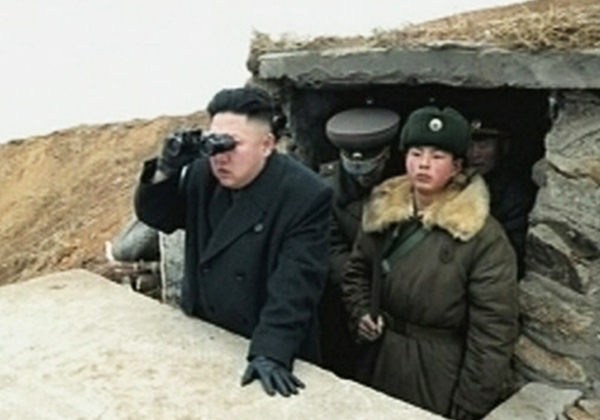 North Korean leader Kim Jong-un looks through a pair of binoculars at an undisclosed location in this still image taken from video shown on North Korea’s state-run television yesterday. [REUTERS/NEWSIS]

The North has already warned that it will disavow the Korean War armistice agreement starting Monday.

The committee also said the North will cut the liaison channel between the two Koreas at the truce village of Panmunjom immediately. It also reaffirmed that the joint declaration on the denuclearization of the Korean Peninsula, agreed to in 1991, is completely nullified.

Stressing that the statement is not just a simple threat, the North said it won’t miss the opportunity for war in order to achieve Korean unification.

The series of threats appeared to indicate that Pyongyang has changed its strategy.

The statements were issued hours after the United Nations Security Council adopted new, tougher sanctions in the North in response to its third nuclear test in February.

With yesterday’s threats, the North made clear that the South will be its target, moving away from its earlier focus on the United States.

After the UN Security Council adopted a resolution in January to pressure the North, Pyongyang declared that the target of its nuclear test, which took place the following month, is the United States.

The North’s latest threats also appeared to be testing the new Park Geun-hye administration. Park has vowed to act sternly against the North’s provocations while building trust between the two Koreas, but her security team is yet to be up and running.

Park yesterday addressed the situation at a joint commissioning ceremony of Korean troops. In her speech, Park said “I will sternly counter any North Korean provocation.”

“No matter how strong its weapons are, and no matter how developed its nuclear arsenal is, a country cannot defend itself with arms,” Park said. “Any country is destined for self-destruction if it only concentrates on its military power such as nuclear weapons while its people are starving.”

Park, then, said she will assist the North to live peacefully with the South if it chooses to change. She also vowed to further bolster the country’s alliance with the United States, strengthen defense cooperation with other neighbors and beef up the South’s military capabilities.

The Ministry of National Defense yesterday issued a strong message to deter the North. “If the North attacks the South with a nuclear weapon, the Kim Jong-un regime will perish from earth,” said the ministry spokesman Kim Min-seok.

He also said the North Korean leader Kim’s visit to the North’s frontline troops near the western maritime border on Thursday indicates his intention to provoke the South. “If the North does, we will retaliate ruthlessly,” Kim said. “There won’t be a limit to the scope of our retaliations.”

The South’s military readiness was already upgraded as of Wednesday. The Joint Chiefs of Staff also issued a strong warning to retaliate against the North Korean leader if the South suffers an attack.

The artillery units along the inter-Korean borders are ordered to remain ready while the Navy deployed additional ships to the northwestern waters.