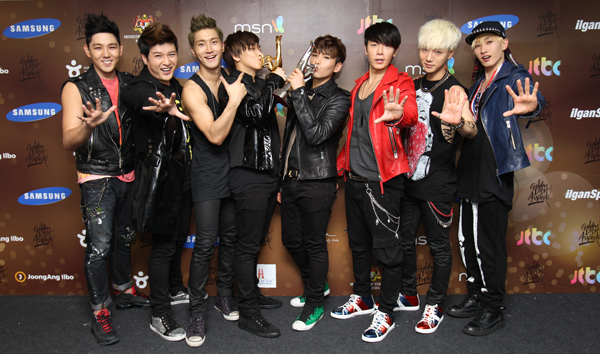 Using the Hangout function on Google Plus and YouTube, each member talked about themselves in a talk show format and answered questions from fans around the world. They also described a new world tour that will start soon. The “Super Show 5” will take the group to many parts of the world including Japan, South America and Europe. It will begin with concerts in Seoul on March 23 and 24.

The group performed in the Indonesian capital Saturday as part of KBS 2TV’s “Music Bank Live in Jakarta.” The show, which was held at the Gelora Bung Karno Stadium, featured Super Junior and other K-pop groups such as SHINee, Beast, 2 PM, Infinite, Sistar and Eru. Indonesian groups such as Afgansyah Reza and S4 also performed.

Saturday’s show, broadcast in dozens of countries through via KBS World, celebrated the 40th anniversary of diplomatic ties between Korea and Indonesia.