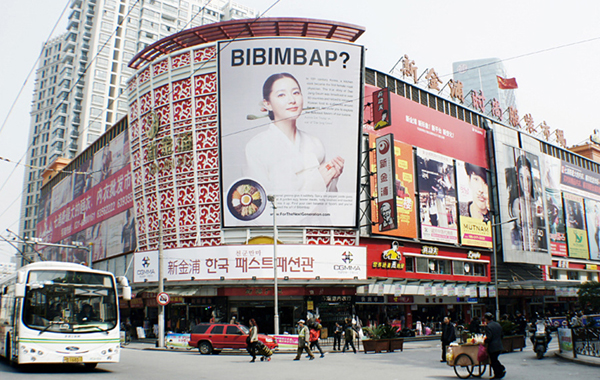 A picture of Hallyu actress Lee Young-ae with Korea’s well-known dish bibimbap will be displayed at a busy street in Shanghai for the next six months, according to scholar Seo Kyung-duk of Sungshin Women’s University yesterday.

The picture is from an advertisement published in The New York Times last month to promote Korean food.

The star of the hit drama “Dae Jang Geum” was chosen for the ad as she played the role of passionate cook-turned-doctor who showed the healthy side of Korean cuisine some 10 years ago when the show hit the airwaves.

The billboard is 10 meters (33 feet) tall and 15 meters wide and is displayed on a major fashion street Qipu Lu, where around 30 million people pass by annually.

As “Dae Jang Geum” still airs on multiple channels in China, the advertisement will help raise awareness of Korean food among the Chinese, Seo said.

Thanks to Lee’s popularity, many shoppers, merchants and travelers are taking pictures with the ad in the background. By Lee Sun-min