Ahn returns to run for seat in Seoul

Ahn returns to run for seat in Seoul 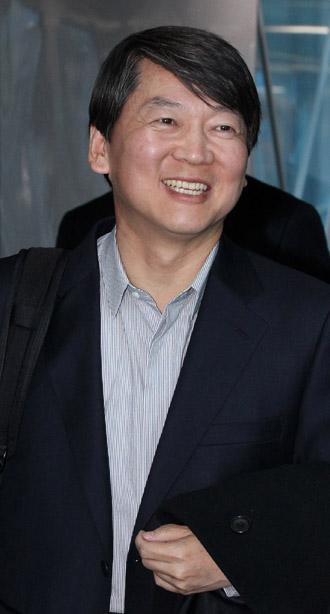 Former presidential candidate and liberal icon Ahn Cheol-soo returned from a self-imposed exile in the United States and confirmed his candidacy in an upcoming legislative by-election.

“First, I sincerely appreciate your support during the presidential election campaign,” Ahn said after disembarking from a flight from San Francisco at Incheon International Airport. “I feel sorry for not meeting your expectations and responding to your support. Any disappointment was all my fault.”

Ahn, a 51-year-old businessman-turned-professor-turned-politician, ran in last December’s presidential election as an independent liberal and shook up the race with delirious support from young voters and liberals sick of politics as usual.

But after difficult negotiations with the Democratic United Party over merging his candidacy with its candidate, Moon Jae-in, he abruptly dropped out of the race and endorsed Moon.

On the day of the presidential election, he left for the United States after casting his ballot, seemingly in disgust.

Ahn had promised a new form of politics for Korea.

At the airport yesterday, he said: “Instead of ‘high [top-down] politics,’ which controls people and divides them and leads to conflict, I want to do ‘low [bottom-up] politics.’?” he said. “I think my running for the Nowon C District of Seoul is the start of that.”

Before boarding the flight, he told Korean reporters at San Francisco International Airport that he had had “time to ponder various things.”

“I now return,” he said, “embracing the result of my contemplation, the thoughts and the determinations in my mind.”

In the April by-election, three seats will be filled - Nowon C District in northeastern Seoul, Yeongdo in Busan and Buyeo in South Chungcheong. Nowon C District and Yeongdo are strongholds for liberals, while Buyeo is a conservative area.

So far, in every legislative election in Nowon C District since democracy was restored in 1987, voters have elected liberals except in the 18th National Assembly election.

Roh Hoe-chan, an iconic labor activist and co-chair of the opposition Progressive Justice Party, lost his seat on Feb. 14 after the Supreme Court upheld his conviction for disclosing an illegally taped conversation.

Roh’s wife, Kim Ji-seon, a renowned activist and feminist, has declared her candidacy for the seat.

Asked if he would run instead in Busan, his hometown, Ahn insisted on running in Seoul.

“I determined to scatter new seeds of politics in the Seoul and Gyeonggi region, which is a litmus test of the people’s demand beyond regional politics,” Ahn said.

Ahn said he has no intention of merging his candidacy with the PJP’s Kim.

“I always welcome a dialogue between people who have the same goals,” Ahn said. “But I won’t take political mechanics anymore.”

He also said nothing has been decided on whether he would create a new political party.

The return of the potential political rock star has rattled the political arena, particularly on the side of the liberals.

Speculation is rising that if Ahn could cause serious damage to the DUP, which is suffering factional infighting.

A survey released by Korea Gallup on March 8 shows that 23 percent of respondents would support a political party started by Ahn, while the DUP had only 11 percent support. The ruling Saenuri recorded 37 percent.