Another rough outing for Ryu in 3-2 loss to Brewers

Another rough outing for Ryu in 3-2 loss to Brewers 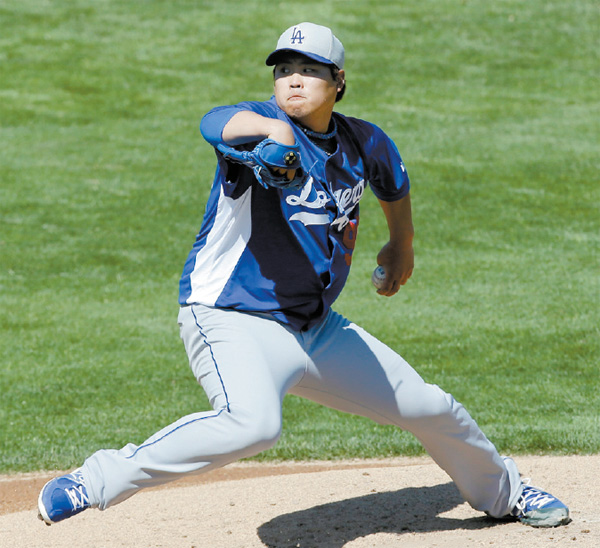 Los Angeles Dodgers starting pitcher Ryu Hyun-jin of Korea throws to the Milwaukee Brewers during the first inning of a spring training baseball game in Phoenix, Monday. Ryu took the loss after allowing three runs on five hits over 4 2/3 innings in a 3-2 loss.[AP/NEWSIS]

Ryu Hyun-jin of the Los Angeles Dodgers allowed three runs on five hits over 4 2/3 innings in a 3-2 loss against the Milwaukee Brewers on Monday.

It was the Korean left-hander’s second loss in three preseason starts and took his ERA to 5.91. In 10 2/3 innings, Ryu has allowed 13 hits and seven runs. The 25-year-old southpaw took the mound after scheduled starter Zack Greinke, a $147 million off-season signing, was scratched because of a medical exam on his right elbow.

All three runs against Ryu came in the fourth inning at Maryvale Baseball Park in Phoenix, Arizona.

Carlos Gomez started things with a walk and scored on a Rickie Weeks triple high off the center field wall. Khris Davis singled home Weeks and then scored on a base hit by Blake Lallli.

Ryu struck out Bobby Crosby and retired Donnie Murphy to a fly to end the inning.

In the fifth, Ryu retired Norichika Aoki and Jean Segura before being replaced by Josh Wall.

According to the Los Angeles Times, Ryu said he continues to believe he will be successful in the Major Leagues.

Ryu, who opted out of the 2013 World Baseball Classic to focus on spring training with the Dodgers, has set his sights on becoming the first Korean to win Rookie of the Year.

After signing a six-year, $35 million contract with the Dodgers in December, he said his goal is to win at least 10 games and have an ERA less than 3.0 every year with the Dodgers.

He also said he hopes to break a record set by his former Hanwha Eagles teammate Park Chan-ho as the winningest Asian pitcher ever in the Major Leagues.