For many, cut-rate fashion is no bargain

For many, cut-rate fashion is no bargain 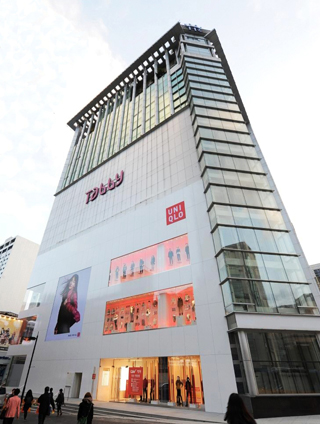 The biggest Uniqlo store in Asia is located in Myeong-dong, central Seoul. Many SPA brands, including Zara, have stores nearby. [JoongAng Ilbo]

A 31-year-old surnamed Park recently purchased a pair of pants from Uniqlo, a popular low-price fashion brand, after hearing about it from friends.

After two weeks, however, she fell while riding a bicycle and tore the pants.

She thought that since Uniqlo is a well-known name, she could have the trousers conveniently repaired at the store where she bought them. But Park was told by an employee that Uniqlo does not mend clothes.

“It was surprising to hear the brand doesn’t have an official service center given that there are so many Uniqlo stores and so many people purchase products from them,” she said.

Like Park, there is a growing number of consumer complaints that SPAs (specialty store or retailer of private label apparel) such as Uniqlo, Zara and Mango do not offer after-sale services.

SPA brands are known for their quick turnaround from the catwalk to the mall. They are produced by fashion houses that offer cheaper prices on high-quality clothing by managing everything from the retail process to design, production, distribution and sales.

Based on a study by Consumer Research, a government-certified group, of the five major SPA brands in Korea - GAP, Uniqlo, Zara, H&M and Mango - none has an after-sale service center.

“Consumers are not able to receive services if their clothes are torn or they need an extra button,” said an official from Consumer Research. 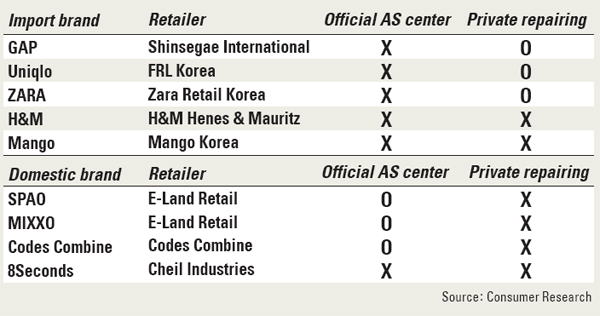 Based on the study, GAP, Uniqlo and Zara refer customers to repair stores, but H&M and Mango do not.

Fast fashion brands have surged in popularity in recent years with trendy and stylish clothes. The market volume of the five major global brands in Korea amounted to 1.9 trillion won ($1.7 billion) in 2011, according to Consumer Research. Competition has become fierce with local fast fashion brands like SPAO and MIXXO entering the market. Many domestic SPA brands have after-sale service centers, the group said, the exception being 8Seconds, which has been launched by Cheil Industries.

“SPA brands have been criticized for damaging the environment with their ‘disposable’ fashion,” the official said. “Global SPA brands have expressed their position that it is difficult for them to operate after-sale service centers with the low-profit structure they have.”

“We are currently confirming our official response,” said an official from Uniqlo. “What we can say about our after-sale service policy is that we offer consumers the service of mending their pants for free if they wish. If the trousers cost less than 29,900 won, however, we charge 2,000 won.”