On Monday afternoon, famous female singer Lee Hyo-ri posted a message that read “A fine for a person who exposes his or her skin is too much. Is this for real? I’m so dead!”

After her message was retweeted by her followers and became a viral Internet issue, the term “insufficiently dressed” started trending on Naver, the country’s largest Web portal site.

Park Geun-hye’s cabinet approved a revision on Monday that regulates certain “inappropriate” social behavior such as stalking and public indecency, which includes being “insufficiently dressed” in a way that could make someone uncomfortable. 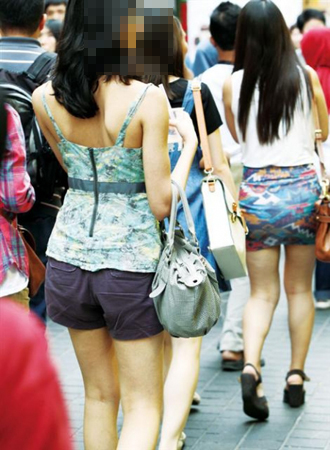 The revision that will take effect on March 22 includes a 50,000 won ($45) fine for anyone showing too much skin on the street.

Netizens complained that the Park Geun-hye administration is heading backward to her father’s period in the 1970s.

Some messages read, “It reminds me of those police officers who carried rulers to measure the length of women’s skirts and men’s hair,” and “The time when the government suppressed people by establishing strong regulations like they did back in the 1970s is returning.”

“They must not know that such regulations have existed for decades,” a spokesman of the National Police Agency said.

“They are not newly established or revived by the government.”

The police explained that those people who expose their skin too much in public - anyone who wears see-through clothing and who makes someone uncomfortable by exposing areas that should be covered by clothing - were subject to a summary trial prior to the revision of the law.

However, the part “people wearing see-through clothing” was eliminated in the revised regulations.

“The revised regulations are rather more moderate than before,” the police said.

The benchmark for “insufficiently dressed” has been under fire on the Internet, especially for those K-pop girl groups who often wear miniskirts and tank tops onstage.

“They are not subject to punishment,” the police said.

The NPA explained that those performers will be fined if they intentionally expose their breasts or backsides.

It stated that inappropriate social behavior, such as stalking someone, is subject to an 80,000 won fine.

Making a disturbance in a government office building, including a police station, while intoxicated is subject to a maximum fine of 600,000 won.

A similar type of Internet trend occurred ahead of last year’s presidential election.

The keywords “Ahn Cheol-soo - room salon” appeared automatically on the country’s major Web portals when people typed Ahn in the search toolbar after a monthly magazine reported that Ahn had visited a room salon.

It was later identified as a groundless rumor.

“Many people in the country read news articles and obtain necessary information through Web portal sites rather than from newspapers or television news,” said Mass Media Prof. Choi Jin-soon.

“Every Web portal site takes great advantage commercially by creating tons of unidentified rumors and wrong information. Rather than discussing facts, many people tend to just decide whether they like or dislike the subject of the news.”