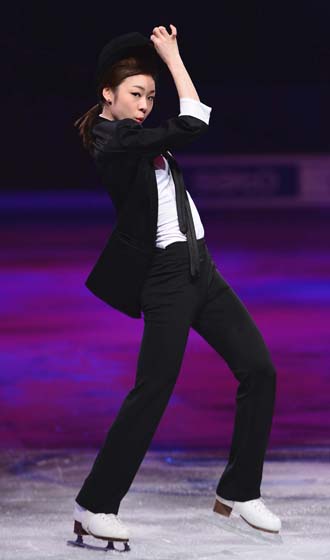 After reclaiming the world championships in dominant fashion, Kim Yu-na might have thought that feigning modesty would be a bigger affront to other figure skaters than saying how she really felt.

So, she took some liberties in exercising her bragging rights, admitting that her success can be attributed to her natural talent at least to some extent.

“To be frank, there are many athletes who put in more effort than me. If I look at them, I think I was born gifted,” Kim, 22, told reporters after winning the 2013 World Figure Skating Championships in London, Ontario, Canada on Sunday in Korean time.

In her first appearance at the worlds in two years, Kim showed no signs of rust from her 20-month break. She scored 218.31 points, the second-most ever in women’s figure skating. She also holds the highest-point mark, 228.56, which she set at the Vancouver Olympics.

Kim, who has set her sights on defending her Olympic title in Sochi next year, still added that a strong work ethic has also made her the top athlete that she is.

“On the other hand, there are gifted athletes who don’t know their talents and don’t try,” she said.

“In that case, no one will notice whether they’re talented. The gifts you’re born with seem like nothing unless they’re supported by the effort.”

Kim received 148.34 points in her free skate on Sunday, over 13 points more than the runner up. In Friday’s short program, her lead was only three points due to a deduction on her landing posture. A video replay proved that was a mistaken call.

Kim said she wasn’t happy with the deduction but was trying to let it go. “In general, there are differences in opinion between athletes and judges, and I’ve experienced it in lots of events, so I didn’t care that much,” Kim said. “I can’t change things once the points are given. I just thought that I would do well in the free skate.”

Kim, who debuted on the senior stage in 2007, said that she was more pleased about the winning the first world title in 2009 than the 2010 Vancouver Olympics.

“I finished third at the worlds in 2007 and 2008, and that made me think that I may not be meant to win the world championships,” the 2006 junior world champion said. “The Olympics are held every four years, but the worlds are every year, and I felt bad for not winning the worlds once.

“I think that’s why I was happier winning [the 2009 worlds than Olympic gold].”

Kim, who is scheduled to arrive in Korea today, will take a break at home for the time being before beginning her final season as an athlete. She announced last July that she will retire after the Sochi Olympics, to be held in February of 2014.

She said that she will choose her new program carefully.