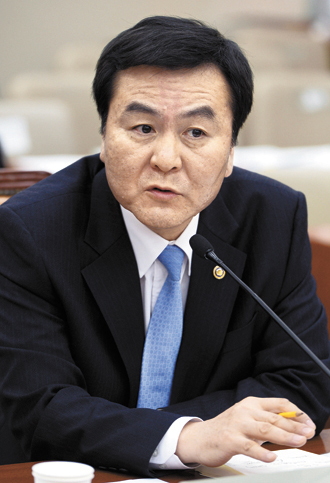 Shin Je-yoon, who has been nominated to head the country’s financial regulator, hinted yesterday that the chiefs of public institutions and financial groups could be replaced “if necessary” before their terms expire.

Shin, first vice minister of strategy and finance, stood before National Assembly lawmakers for a confirmation hearing as head of the Financial Services Commission and was asked sensitive and general questions related to the country’s financial sector.

Representative Kim Yong-tae of the ruling Saenuri Party asked whether he is willing to make suggestions to the president to replace heads of financial institutions and groups.

“I will make such proposals if there is a need for replacements,” Shin responded.

The nominee also laid out criteria for deciding whether a replacement is needed, such as sufficient expertise in a certain field and being in line with the Park Geun-hye administration’s philosophy. Shin also noted that targets for replacement will be public financial firms, institutions in which chiefs are named or recommended by the FSC, and those financial firms in which the government has a large share and is looking after because they have no owners.

Shin’s comments came amid growing speculation that heads of financial groups and institutions will be replaced. Many financial chiefs during the former Lee Myung-bak government are still in place, including Kang Man-soo, chairman of the Korea Development Bank Financial Group, and Euh Yoon-dae of the KB Financial Group. Both are considered to be so-called “MB men.”

There was criticism during the former Lee administration that many of his associates with school, regional and church ties were appointed as heads of financial institutions.

A recent state audit showed business has worsened for some financial institutions in recent years. According to the Board of Audit and Inspection last week, the KDB Financial Group, for example, was found to have suffered losses because of poorly managed savings products. The inspection agency also caught KDB misusing its operating profits and giving out up to 4.1 billion won ($3.7 million) as incentives to its workers.

It is the first time that Shin has publicly expressed his thoughts on replacing financial chiefs. Shin is expected to succeed Kim Seok-dong, a veteran financial expert who left last month.

Other matters were raised at the confirmation hearing, including the lingering issue of privatizing Woori Financial Group, in which the government invested 12.8 trillion won in 2001 to help the financial institution from going bankrupt amid the Asian financial crisis.

“The earlier the privatization of Woori Financial, the better,” said Shin. “I will review all possible means [to privatize Woori] except selling people’s shares.”

Shin was also asked about the government’s proposed “people’s happiness fund.” The idea is to come up with an 18 trillion won fund to write down overdue debts of low-income households by up to 70 percent. Some say, however, that households might not be motivated to repay their loans.

Shin, however, downplayed such concerns.

“There could be problems of moral hazard and reverse discrimination, but the issue should be understood from the perspective of social security,” the nominee said.